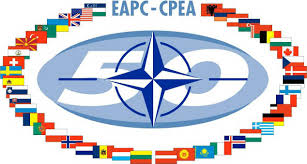 NATO got a boo-boo from Vlad Putin's nuclear weapons gala earlier this week. The Russian strongman unveiled his country's latest nuclear toys and there were loads of them. New and longer range missiles, nuclear powered and nuclear armed robotic submarine/torpedoes that can deliver a nuclear warhead to an unsuspecting harbour from thousands of miles away. Hypersonic warheads that can defeat anti-missile defences. Even nuclear powered, extremely long range cruise missiles.

Most of these super-weapons we've known about for at least a few years. The cruise missile thing, that was a bit of a surprise.

Then again, NATO wasn't especially worried about calming tensions when it moved its forces right up to Russia's doorstep and began seeding Europe with anti-missile missile batteries. NATO wasn't worried when it hobbled together an alliance armada to provocatively sail the Black Sea.

You see, when we do it that's okay. We're good guys. When they respond to it, well that's "unacceptable."

There's a crazy arms race underway around the world, Africa and South America largely excepted. China, East and South Asia, Asia Pacific all the way down to Australia, the Middle East, Russia and the United States, everyone's going for their guns. Everyone wants the latest and the greatest, emphasis on submarines, stealth warplanes and those bombs we don't talk about in polite company. Yeah, we're talking about you, Saudi Arabia.

You can't fix this mess without figuring out who broke it, when and how. What destabilized these vast swathes of our planet? What, if anything, can be done to fix it? Unless you take an honest look at what went wrong with the resolve to make things right, all you're left with is the strategic, thermonuclear pissing contest we've witnessed this week. That's not good.
Posted by The Mound of Sound at 10:32 AM

The profiteers broke it. Deliberately. There simply isn't much profit for them in peace.

I guess Putin has figured out that for the Americans to back off you need more than just possessing a deterrent, you have to posture loud enough for it to get through their overconfident heads that you have it. It's been clear for ages that missile defence is not going to stop a significant nuclear power from destroying the United States should a war happen. Missile defence doesn't work real good and countermeasures are easier, and it has been clear to anyone who felt like looking into the question that the Russians in particular have such countermeasures.

But the Americans, whether because of swaggering bravado or because they can't admit something they spent gajillions of dollars on isn't much use, have been basically acting as if they could actually get in a nuclear war with Russia and win. Nobody wins a nuclear war. They seem incapable of believing that anyone could possibly be able to stand up to them, blinded by their own propaganda. Maybe they'll get the picture now that Putin's rubbing their noses in it.

Incidentally, why don't we call Trump the "American strongman"? Why isn't Netanyahu the "Israeli strongman"? Why isn't Trudeau the "Canadian strongman" . . . OK, bad example. The "Canadian weakman"? But seriously, if a leader who's on the US' side was technically elected, no matter how questionable the election, they get called "President so-and-so", even if it's the Honduran guy who is basically a dictator. If it's a leader whose policies the US (and by extension Canada) doesn't like, then they're a "strongman" or a "caudillo" or a "dictator" even if they were elected in squeaky-clean elections like Venezuelan ones. I don't see any reason for independent blogs to inherit this kind of coded language.

i heard trump's spokesperson sarah huckabee sanders on the news yesterday decrying the recent pronouncements by putin, and she made the statement that these developments were in contravention of russia's treaty obligations. as someone who is knowledgable about military matters, can you speak to whether that statement is true or not? the statement went without remark by the reporter, though it seems a serious enough accusation that it would merit it's own discussion. quelle surprise.


@ anon 11:45. Both sides are blaming the other on who violated what agreements, when. You can trace this back to the fall of the Berlin Wall and German reunification. An American Russia-adviser who accompanied George H.W. Bush to talks with Gorbachev related the grand bargain by which the Soviets agreed to allow East Germany to fall under NATO jurisdiction in exchange for a promise that NATO would never expand beyond the German border into the Warsaw Pact territories. Moscow wanted a buffer zone between it and the NATO countries. George w. Bush and Dick Cheney instead chose to march NATO forces right up to Russia's doorstep, swallowing up the now independent WarPac countries as they went. Russia, of course, had 40-million memories of what happened the last time armies from the west massed on the frontier of the Rodina.

NATO, i.e. the US, then proceeded to establish anti-missile missile batteries in Poland and elsewhere ostensibly to defend against a missile attack from Iran but they were fooling nobody.

This is not to say that Russia hasn't violated its arms treaties obligations but the west has provided ample provocation that violates the spirit in which those deals were inked.

Complicating your question is the Bush Doctrine under which George w. unilaterally withdrew from the ABM treaty with Russia and proclaimed the right of the unilateral use of military force which is contrary to the UN Charter. All of this factors in to the state of affairs between Washington and Moscow today. In other words, there's no easy answer to your question.

I think the United States yearns for the old days of a unipolar world.

@ PLG - remember that Trump is pushing for a third option, a hybrid conventional/nuclear war with low yield, tactical nukes added to the mix. The policy associated with that contemplates certain "first use" scenarios by which the US might use nuclear weapons against an adversary in an otherwise conventional war.

That made the news but only in passing. It certainly didn't lead to the level of debate it deserved and I'm sure was quickly flushed out of the public consciousness.

@ PLG. My understanding of the "strongman" label is that it can apply to a leader even in a constitutional democracy provided the individual flouts democratic norms.

Trump flouts democratic norms. Netanyahu flouts democratic norms. Hernandez in Honduras blows democratic norms out of the bloody water with stolen elections that the constitution says he shouldn't have been running in in the first place and paramilitary death squads killing off political opponents. Nobody ever calls them a "strongman". Why? Because while "your understanding" may be the theoretical definition, the actual discourse rule which you yourself are in fact observing is that a "strongman" is an epithet reserved for the "other side". What you consciously understand and what you unconsciously do in this case are distinct.

I know there are various allegations that various dead people were ordered that way by Putin. These allegations may or may not be true (and in any case there are similar suggestive deaths in the West, which only crackpots lay at the door of Western leaders--Paul Wellstone, for instance). But leaving aside the stuff for which there is no direct evidence, I'd be interested to know what democratic norms Putin in specific is known to have flouted? There's plenty of general electoral corruption in Russia, but the impression I've gotten is that little of it relates to Putin in specific--the parties are fighting like crabs in a bucket, but Putin doesn't need to because his approval ratings are always sky-high and it's a presidential system; he isn't even specifically identified with any political party as far as I know, although he does have a political machine that isn't an electoral party as such. Generally when it comes to Putin, everything I hear is mostly, if you look at it, along the lines of "Well it's Russia so he MUST be!" I guess he's known to have worked around term limits, but I find it hard to get excited about that considering in Canada we don't HAVE term limits.
Don't get me wrong, I'm willing to believe Putin has and/or does flout democratic norms. He's an ex-KGB guy after all. I just wouldn't mind some specifics where I frankly in the news mostly see vague and evidence-free accusations or even just assumptions. And ideally before I start using epithets I don't apply to Western leaders, I'd want specifics that we would consider out of the ordinary for a Western president or prime minister.