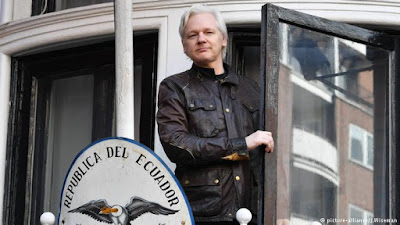 The Ecuadorean embassy in London has severed Julian Assange's communications with the outside world. Oh, that's a pity.

Ecuador's government on Wednesday said it was cutting off WikiLeaks founder Julian Assange's communications outside the nation's London embassy, where he has been living for more than five years.

Ecuadorian officials said the measure was taken in response to Assange's recent activity on social media, which was seen as a violation of a 2017 written agreement that prevents him from sending any messages that could interfere with the South American nation's relations with other countries.

Assange took to Twitter on Monday to question Britain's accusation that Russia was responsible for the nerve agent poisoning of a former Russian spy in the English city of Salisbury. He also questioned the expulsion of Russian diplomats by Britain and other countries.

Isn't it odd how Assange is always ready to step up to the plate when the Kremlin needs a hand?
Posted by The Mound of Sound at 11:51 AM

"It’s hard to comprehend why at this time Moscow would poison him and his young daughter visiting from Russia with a nerve agent (Novichok) created in the USSR from the 1970s but subsequently banned and destroyed under international supervision. Cui bono? Who profits from these poisonings?

Which would mean: Putin—facing no threat from this traded ex-spy or his innocent daughter—ordered their killing, not because they threatened him, but rather to manifest his deep cruelty and evil to the world and his willingness to invite more and more sanctions against Russia. It doesn’t make much sense.

His only motive to kill him at this point would be to punish Skripal for past sins and warn others not to ever sell secrets. But why would such a rational person incur global outrage by using a banned agent to attempt to murder a British citizen and his Russian daughter, for no compelling reason?

There are international legal processes for investigating charges of use of chemical weapons. Russia has asked Britain to observe them, providing evidence, samples, details. It urges adherence to rules established by the Organization for the Prohibition of Chemical Weapons (OPCW) to establish the facts. But London has merely announced it knows Putin was responsible for the state of these two on that park bench."

This is not something I'd cheer on World War III over.

Skripal's contacts in Russia were the basis for HGHQ's monitoring of Russian communications of their "ratfucking" in the Brexit vote, and the US 2016 Elections, and HGHQ and MI-6's warnings to the FBI and IC.

Skripal was also being called as a witness in the Airofot case.

He was by no means retired.

You can follow Russian ratfucking of The West vis three paths.

Or you can follow the trail of dead Russian spies,( 29 so far),

You can also look to history and question the messenger.


Thwap, Leup poses a couple of interesting questions but the overall take of his article is unconvincing. He complains of inadequate analysis which implies that he has some knowledge of this analysis in order to label it inadequate. Have the intelligence agencies really shared their analysis with Leup? I somehow doubt it. Then he goes the cui bono route and again jumps to conclusions based soley on his limited, possibly incomplete grasp of the facts whatever they may be. It's a speculative piece at best. And it certainly is true that a lot of Russians who have fallen out of Putin's favour and fled to the UK do seem to wind up hanged, strangled or poisoned. As Jay points out, 29 so far.


Trailblazer, I don't know how this conversation got onto this siding but the story is about the Ecuadorians and Assange. If you get a chance read Isiskoff and Corn's "Russian Roulette" for better insights on Assange, Russia and Trump.

The "leftier than thou" have been taking their lead from Russia's Media Operations for quite some time now, pre-Brexit, pre-2016.

Rather than being actually "solution based", it's been whattaboutism, fake news, denialism and attacks.

I live in a riding where my vote doesn't matter. Back in the day, the srea was resourced based, union and Dipper Central, Federally and Provincially,

As the economy changed to Transportation, tourism, retail and for profit Education, it became a Conservative stronghold.

Next election I'll vote again for the Dipper, He's a good guy, a Layton/Ries alcolyte, and a perennial 2nd. Even if all the Lib votes went to him, barring some big, local, Com scandal, or massive Fed one, the Con's still going to win.

But if Purity Troll's give us Scheer in the next election, I'll spend my next 4 years reminding certain bloggers of the consequences of their campaigns.

BTW, Greenwald's The Intercept has "burned" another National Security leaker to the Feds. This one a FBI agent providing them with internal FBI doc's on Russian "ratfucking".

Does two establish a pattern?

And, on the other side, you have two serial liars, the USA and the UK, outright refusing to go through established protocols that they have signed, and who are instead, without evidence, blaming Russia, against who they've been conducting a years-long propaganda campaign of demonization.

As a card-carrying Leftier Than Thou, I wish to assure you that my positions on various issues do not wait for my hearing of the approved line from Moscow.

People who rave hysterically about NON-ISSUES such as Putin defeated Hillary Clinton or Putin caused Brexit (while his anti-Brexit Quisling; Boris Johnson is leading the charge accusing him of this nerve-agent attack) really ought not to be listened to with any degree of seriousness.

Cui bono?
"Sergei Skripal and his daughter were poisoned by a nerve agent on March 4 on a park bench in Salisbury, England.

Skripal had been a Russian double agent, a spy who turned over 300 names of Russian spies to British intelligence from 1995 to 2004. He was (not so surprisingly) arrested in Russia in 2004 and sentenced to thirteen years in prison. He was released in a spy-swap in 2010, settled in the UK and became a British citizen.

I see no reason to judge his moral character, although some might reflect that in Kantian general terms what he did was rather bad. (In precisely the same sense that it would be bad for a British citizen to become a double agent for Russia.) Double agents are often punished harshly; this is the way of the world.

Skripal posed no further threat to the Russian state. There is at least one report that he sought to return to Russia recently. It’s hard to comprehend why at this time Moscow would poison him and his young daughter visiting from Russia with a nerve agent (Novichok) created in the USSR from the 1970s but subsequently banned and destroyed under international supervision. Cui bono? Who profits from these poisonings?"

But what about "Tillerson got fired cause he supported sanctions on Putin"...

Under the new guy at State, the Yanks just joined the sanction party bigly.

ooops there goes another narrative


you really should know better than to blindly believe the CIA, FBI or David Frump

Only a day ago she and her father were not expected to live!
There are so many inconsistencies to this story as to make it a theatrical farce.


Well this matter certainly is fuel for speculation. It's all over the board, reflective of each speculator's political alignment, it seems.

Jay has cited a link to Emptywheel's excellent analysis of how Mueller is pursuing this issue through the Manafort, Gates and van der Zwaan indictments. Read the analysis. That's a lawyer's mind at work, either Emptywheel's or someone who is carefully briefing her. It demonstrates that major litigation is inevitably fought on tactical and strategic levels. There's a choreography to it that Emptywheel captures very well. Once you can discern that choreography it becomes quite predictive.

Perspective....
"James Comey is about to get very rich by selling an anti-Trump book to adoring, swooning Democrats even though, according to Nate Silver, Comey is the person most responsible for Trump's win. Politics is weird & Comey is the most skilled opportunist ever" GG


So let's have a "Person(s) Most Responsible for tRump contest"!
whoopee

On your mark, get set, GO


NPoV, you wield a ridiculously broad brush in your criticisms. Not everyone believes quite what you imagine, either in breadth or depth. Would that we did live in your black and white world. It might be far easier.

Looks to me that just about everyone had use for CA.
That includes governments and political parties.

It would seem to be a Government/military project that got out of hand , now just about everyone is back peddling away from their misdeeds.

That is and has been the key problem with Mercrnaries since the days of the Greeks. They don't stay "bought".

Apparently this is the reason for cutting the cord&airwaves
https://www.rt.com/news/422672-assange-tweet-internet-blackout/
Is Assange too cozy with Russia? Perhaps, but the enemy of my enemy... No wonder that Snowden could be safe only in Russia.
Assange is right in that proof of Russia's complicity could be impossible to obtain, unless someone is caught red handed. The poison is apparently just a relatively simple molecule and any highly skilled lab located in military chemical warfare research facility in the West, Middle East or Asia could manufacture it.
The Scripals' plot got really interesting when some news outlets reported that Yulia worked at the information desk of US embassy in Moscow.
Her poisoning might indicate that she was somehow involved in the intelligence work. Proverb about one stone and two birds come to mind.

Assange's cord was cut because he was fucking around with Ecuador's internal politics on Social Media and Ecuador's economic and political relationship with Spain, in violation of his written Asylum agreement with Ecuador.

You know, scorpions and frogs.

Did you know that the death of RT's founder, in a DC "safe house", the day before he was to testify to Congress about RT's place in Russia's Disinfo ops, is being reopened as a murder?

Anon 3:30 - I'm leery of anything reported by the Russian state-owned RT.

Unlike Soviet era "news" like Pravda, which was "all fake news, all the time",

Or the over the top Spudnik,

It's interesting to "watch", but use a 3rd party buffer, because both RT and Spudnik "harvest" users data.

Not to worry Mound.
I am from generation which was able to read Правда in the original issues and convert "fake news" into real ones. Jay is spot on what RT does. But his paragraph on "careful mixing of news" has eerily resemblance of main Western media outlets.

Assange was gagged for telling the truth. Modern politics and truth are incompatible.