McMaster Out, Bolton In. Brace Yourselves. 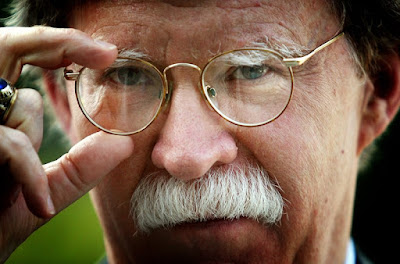 Last Friday, Trump chief of staff, John Kelly, convened the West Wing staff to assure them there would be no more major staff changes for the foreseeable future.

Here we are, less than a week later, and Trump's national security advisor, General H.R. McMaster, is out, extremely far right hawk, John Bolton, is in. Bolton was one of the most bellicose of the Bush/Cheney era neocons.

“I am pleased to announce that, effective 4/9/18, @AmbJohnBoltonwill be my new National Security Advisor,” Trump tweeted. “ I am very thankful for the service of General H.R. McMaster who has done an outstanding job & will always remain my friend.”

“There will be an official contact handover on 4/9,” Trump added.

Bolton, who served in the George W. Bush administration, is known for his hard-line foreign policy views, and has written in support of attacking North Korea.

McMaster’s exit is just the latest in a long line of departures from the Trump White House. 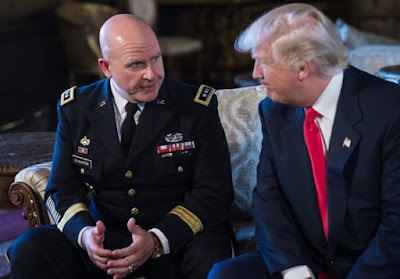 More on Bolton from foreignpolicy.com:

President Donald Trump’s choice of John Bolton as his national security advisor places a hardline unilateralist and keen advocate of military power at the center of the Trump White House.

Bolton has explicitly called for a pre-emptive strike on North Korea, advocates bombing to force regime change in Iran, and wants an open-ended military presence in Afghanistan. He has also called for a much more confrontational stance against China, including stationing U.S. troops in Taiwan.

Bolton shares with the president a disregard for international agreements, and disdain for multilateral organizations like the United Nations and the European Union, and a flair for hurling cutting insults at his many political enemies. In his memoir, John Bolton: Surrender is Not an Option, Bolton repeatedly referred to European Union bureaucrats as “EUroids.”

His appointment, rumored for weeks, deeply rattled foreign-policy experts from Washington to Berlin who worry that McMaster’s ouster and Bolton’s arrival could set the United States on a path toward multiple conflicts.


Think that Doomsday Clock won't be moving up a notch tonight? 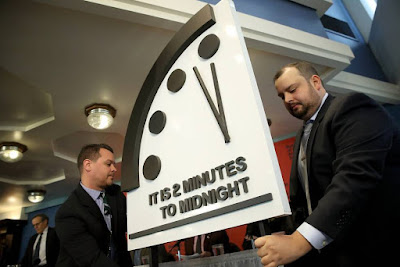 
You too? Trump has moved an anti-North Korea hawk, Pompeo, into State and now Bolton into the National Security portfolio. The Bloody Fang & Claw Brotherhood.

tRump better get some hair thickener. You can see right through to his bald dome.

There's a pattern here with a decidedly ominous cast to it.

Trump is said to be toying with the idea of dispensing with a chief of staff altogether. Given Trump's inability to communicate honestly and his inability to resist hearing whatever he wants to hear that could be disastrous.


John, I think the fullness of Trump's hair is the least of anyone's concerns today.

No surprise really, Trump will always find the worst man for the job. We'll see how long Bolton lasts now that it's been revealed that his super PAC paid $1.1 million to Cambridge Analytica.

Once again, this proves the truth of what Noam Chomsky said recently in the context of climate change but it applies just as well to nuclear war, "the Republican Party is the most dangerous organization in human history. Nobody, not even the Nazis, was dedicated to destroying the possibility of organized human life."

It's pretty clear that Cleek's Law is the guiding platform for Treason Tribble,

"Today’s conservatism is the opposite of what liberals want today, updated daily."

On the bright side,

Robert's turned his twitter thread on conservatism and The FTFNYT Opinion Page into a Vox article,


Jeebus, Cap, how in hell did Bolton get his own super PAC? I understand Chomsky's take on the GOP. If they don't stop this slide into radical authoritarianism, the America we knew for the past half century is toast.


Thanks for the link, Jay. I think I'll skip dinner.

Rebecca Ballhaus
✔
@rebeccaballhaus
Trump introduces Marillyn Hewson, CEO of Lockheed Martin, as Marillyn Lockheed. Tells her of the F-35: “It’s stealth. You cannot see it. Is that correct? It better be correct.”
10:01 AM - Mar 22, 2018

1,581 people are talking about this

Bolton's incapable of learning, can't manage, can't organize, has neither understanding or respect for the NSC process, or the multiple intermeshed groups that make the process possible, fires staff who question him, creates a toxic work environment, and will pick fights he can't win with the JCS, pissing them off, along with picking fights with the remain minions in Treason Tribble's orbit.

Adam doesn't think he will last 6 months and the NSC will be completely gutted during his tenure.

We'll see if Putin confirms Bolton as NSA, or makes Trump pick somebody else.


Bolton's confirmation hearing should be a great indicator of the fealty of Senate Republicans to Trump. Remember that Bolton's stint as US ambassador to the UN under Bush/Cheney was never confirmed. It was a recess appointment. Will McConnell's crew hold their noses and approve this guy?

There won't be a confirmation hearing, Mound. None is required for the job and Trump is free to hire whatever maniac he likes.


Jesus, Cap, I couldn't believe that so I looked it up for myself. Loki lives.

Yup, but will Putin confirm Bolton?

I assume Trump already got Putin's green light in the telephone call they had the other day. Although the Walrus is a long-standing Russia hawk, he did some commercials for right-wing Russian gun nuts a few years ago praising "a new era of freedom" under Putin. So I guess Putin's on board with this.