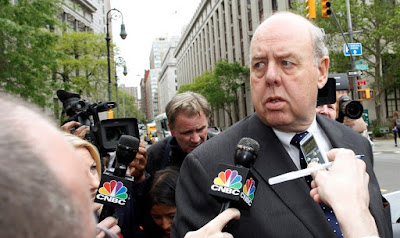 The lawyer heading the Mango Mussolini's legal team on the Mueller investigation is hitting the trail.

John Dowd has reportedly had enough. Some say it's because Trump ignores critical advice. Then again, just yesterday Trump blurted out that he needed "top-tier" legal representation  on this one.

It's enough to make a guy like Dowd ask, "what am I, chopped liver?"


On Tuesday, a White House spokesman insisted that was it. “There are going to be no changes to the White House legal team,” Raj Shah said, a statement that is true only in a legalistic sense, since Dowd headed the president’s team of outside lawyers.

This shows the problem for any lawyer representing Trump: He lies repeatedly, a liability in any client; and furthermore, no lawyer speaking for him can trust that the president won’t undercut or contradict him soon afterward, just as he does to aides.

Dowd is the second personal lawyer for Trump to leave, after Marc Kasowitz, who resigned in July 2017, following ill-advised and vulgar emails to strangers. (Mark Corrallo, a spokesman for Trump’s legal team, left around the same time, and has reportedly spoken to Mueller since.) Dowd is a veteran, successful lawyer, and his appointment was viewed by experts as a step up from Kasowitz, who had represented Trump in New York but had little experience with a complex Washington investigation like Mueller’s.

Dowd did make some notable missteps during his tenure. In addition to the changing attribution of his statement to The Daily Beast about firing Mueller, he was also overheard by a Times reporter speaking loudly about the investigation with Ty Cobb, a White House lawyer, at a steakhouse in Washington. Dowd also claimed responsibility for a tweet from Trump’s account, which seemed to contradict the president’s earlier statements about the firing of National-Security Adviser Michael Flynn, and to some observers implied obstruction of justice by Trump.

The writing was on the wall when Trump hired DiGenova, and Dowd can read as well as anyone.

You know the old saying, Mound, "if the facts aren't on your side argue the law; if the law's not on your side argue the facts; and if neither is going your way, pound the table and yell." Well, DiGenova and his wife have made names for themselves pounding the table and yelling on Fox about deep state conspiracies to get Trump and ignore the Uranium One "scandal." Trump's legal prospects are at the table pounding phase and Dowd doesn't want his reputation going down with the ship.

I suspect Dowd knows when his case is going down in flames.


I've read little about Dowd but he's looking at a tough case made vastly worse by a reckless client. Trump is the sort of maniac that busy lawyers just throw out of their offices. The guy sabotages his own counsel.

Cap, I wondered yesterday what could possibly have made Trump hire diGenova. I expect he had watched this guy spout nonsense on FOX and thought "that's my man."

.. Mound..
I suspect you give Trumph way too much credit
He does not really have or hold a thought
His tongue moves and his lips emit
.. some noise

This is not homo sapiens
its homo real estatus fraudulas
Admittedly, a pitiful example
of the breed.. but hey..

Another thought that ran through my mind was the possibility that Trump told Dowd that, despite the political and legal advice to the contrary, he was going to ditch Rosenstein, replace him with a supplicant and then fire Mueller - the "constitutional crisis" scenario. If Trump is thinking of the thermonuclear response, I couldn't blame Dowd for wanting to get out of Dodge, as far away as possible, as quickly as possible.