Hey Donnie, It's the Ides of March 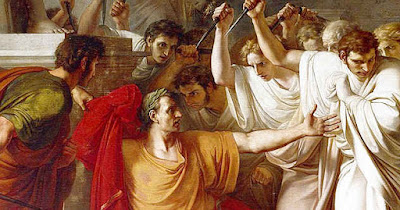 What's that sound I hear? Oh yeah, it's the sound of knives being sharpened.

I was struck when I watched Rex Tillerson give his farewell press briefing yesterday after being fired by Twitter, the ultimate humiliation for the former CEO of ExxonMobil. He wasn't speaking in his usual calm, assured cadence. His voice was shaky and it was hard to tell if he was struggling to control anger or shock.

The impression I was left with was this is a powerful man who probably has many powerful and loyal friends, none of whom are apt to forget Trump's slight anytime soon. I expect Tillerson et al will see to it that Trump's indignity is paid back.

Meanwhile in the Big Apple you've got Gary Cohn, Mr. Goldman Sachs, and his coterie who are probably also honing their daggers.

With Kelly and McMaster rumoured to be next in line to walk the plank and the FBI and the CIA still reeling from Trump's nut punch, the Mango Mussolini has few allies within the military/national security apparatus to race to his defence.

Oh yeah, and we can't forget the Congressional Republicans who are coming to see Trump as a major electoral liability. This president's political capital is nearing overdraught.

With a special prosecutor breathing down his neck and at least half of his children considered in some legal jeopardy, Trump has put himself in a terrible position. There's something he can genuinely take credit for.
Posted by The Mound of Sound at 2:41 PM

With Kelly and McMaster rumoured to be next in line to walk the plank and the FBI and the CIA still reeling from Trump's nut punch, the Mango Mussolini has few allies within the military/national security apparatus to race to his defence.

And yet he survives.
That he survives casts a cloud upon the mentality of the USA electorate.

That mentality I speak of has it's routes here...

FFS; even the Boy Scouts are complicit!!


It does seem reminiscent of the HJ, TrailBlazer

Mound.
The problem is that the USA is rotten to the core!
When a country is indocterating it's youth in such a manner there is little hope left for a reasonable outcome to top world issues.

When are we going to stop making excuses for these people?

Exactly right, TB. Taking out Trump without taking out his party is like pulling the biggest dandelion on the lawn and expecting the rest of them to wither and die. It's never that easy.

It goes way beyond the GOP.
The problem is the very core of "American exceptionalism" which itself is fallacy.
The US is little , perhaps the same, as it's worst antagonists.
These guys are beginning to think Superman and Batman are real people!!