Cambridge Analytica and Its Cast of Shady Characters 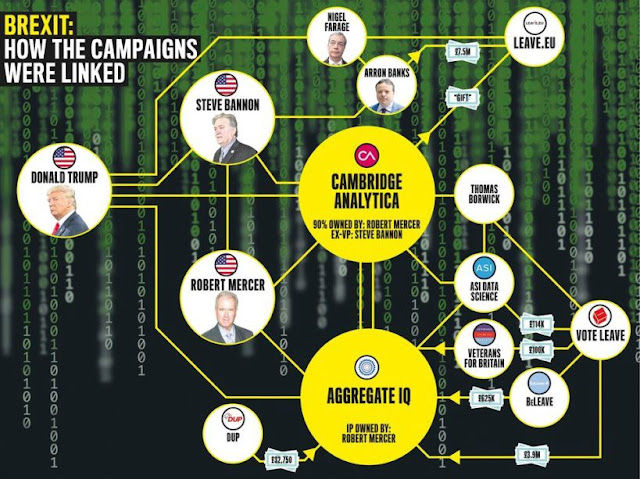 The journos are having a field day with this. The Cambridge Analytica scandal is chock full of shady characters, an odd percentage of them with seeming links to Russia.

There are the better known snakes: Steve Bannon, Robert Mercer and his daughter/clone, Nigel Farage and Trump himself of course.

You can now add to that Trump's pick for his next national security advisor, John Bolton.

Bolton’s super PAC has paid Cambridge Analytica more than $1.1 million since 2014 for “research” and “survey research,” a Center for Public Integrityanalysis of campaign finance filings shows.

Think that won't come up at Bolton's Senate confirmation hearing?


Tadas Jucikas and Brent Clickard, former close colleagues of Chris Wylie, the man who blew the whistle on Cambridge Analytica, founded Genus AI in May 2016 as an artificial intelligence company that “integrates 3rd party as well as 1st party data sources and applies proprietary insights and algorithms to unlock the value hidden in data,” according to its website. Some of those techniques were ostensibly shaped by their time at Cambridge Analytica’s parent company, SCL Group, where they, along with Wylie, pioneered practices that would form the basis of the data mining outfit, which is currently under fire.

Tadas Jucikas has a PhD from Cambridge. His LinkedIn page claims he's multi-lingual, fluent in English, German, Lithuanian and Russian. Tadas' bro, Victoras Jucikas, lists himself as a former executive-director at Goldman Sachs, now chairman of Genus AI, studied at Kaunas University, Lithuania, and then Jacobs University, Bremen, Germany. He too claims fluency in the same four languages as Tadas. Tobias Kloepper, educated in Germany, speaks German and English. Rounding out the team is American, Jesse Kamzol, who also has now moved on to GenusAI. Kamzol doesn't seem to have any eastern European connections but he does list three positions he held with the Republican National Committee, RNC: beginning as 'list director' before moving up to 'deputy strategy director' and, finally, RNC chief data officer.  Jesse apparently left the RNC in August, 2017.


Check out Aaron Banks, British political "bad boy." Just for fun I chose him from the flow chart above to check out. OpenDemocracyUK has a delightful profile on this guy, supposedly a self-made multi-millionaire who threw a good chunk of his fortune at the Brexit campaign.  Trouble is, the folks who wrote Banks' profile can't quite figure out where all that money came from. How did a door-to-door vacuum cleaner salesman, with a Russian wife, get so rich selling losing companies for huge profits?

In September 2013, the man who bought Brexit – Arron Banks – was in trouble.

For the past two years, financial regulators in Gibraltar had been scrutinising his insurance under-writer, Southern Rock. They had discovered it was keeping reserves far below what was needed.
This was a serious problem. Banks claimed he had already provided £40 million to plug the hole. He also told the regulator he would step down as a director, but has since been required to find an eye-watering £60 million in extra funding.

A year later, these financial worries seem to have completely evaporated. Banks had begun buying diamond mines, investing millions into chemical companies and wealth management firms, setting up loss-making political consultancies, and most famous of all – funding the United Kingdom Independence Party (UKIP).


If Banks was in such a tight spot in September 2013, how did he manage to be so generous the following year?

It is here the cracks in Banks’ biography start to appear. Banks has claimed he was promoted and rose to lead his own sales team at Norwich Union – now part of Aviva. However, Aviva say they have no record of Banks ever having worked for Norwich Union. He has also claimed to have worked for Warren Buffett around this point in his career. We asked Buffett about this. He replied. "I have no memory of ever hearing of the name Arron Fraser Andrew Banks. He certainly never worked for me." Further checks across the Berkshire Hathaway group, made by Buffett’s office, yielded no evidence he had ever worked for any of his subsidiaries. In a letter delivered by his lawyers, Banks declined to comment on either of these points.

Enter the Lady from Russia.

In 1998, Banks got taken on by a tiny broker focussed on motorcycle insurance run from offices above a shop in the sleepy village of Thornbury. He was granted a 20% shareholding in the fledgling business. In November 2000, he resigned as a director of the firm, and two months later, sold his shares for £251,000.

Shortly afterwards, Banks met the woman who was to become his second wife, a Portsmouth-based Russian called Ekaterina Paderina. According to the Sunday Times, Paderina’s former husband had been interviewed twice by Special Branch because they suspected her of working for the Russian government. Ekaterina moved to join Banks in Bristol but stayed on the electoral roll in Portsmouth until 2008, still registered to a council flat overlooking the naval base. When Portsmouth Council found out she should not have been entitled to the flat because she was living with Banks, council officials reportedly demanded a cash payment be made by the Banks family in recompense.

One of the things that stood out for me yesterday was the number of high ranking military officers involved. American, British and Russian they were all there for Brexit and Trump. It looks like the Americans and Brits were traitors while the GRU guys were loyal to Putin. Actually, they all worked for Putin ; cash over country.

And yet, Peter Thiel stll sits on the Facebook Board.

I remember reading about 2 years ago, that $20 billion in stolen Federal Funds "ghosts" out of Russia every year.

The Airflot Case in the UK is quite interesting.

Any connections to Canada's Conservatives?