This is Awesome - I Think. 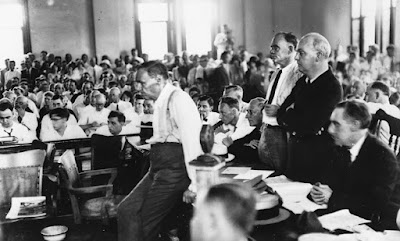 The folks at Grist are billing it the Scopes Monkey Trial for the 21st century. Only this time it isn't evolution on trial but climate change.

The trial pits the cities of San Francisco and Oakland against the major oil companies" BP, Conoco, ExxonMobil, Chevron and Shell. If preliminary indications hold true, the Oil Majors are in for a rough ride. That begins with the judge, William Alsup.

Alsup’s the guy who blocked the Trump administration’s attempt to end DACA, taught himself how to use a programming script for a Silicon Valley lawsuit, and, as part of another tech battle, asked two ride-sharing services to give him a tutorial on self-driving cars to make a better-informed ruling.

Alsup’s quest for a well-rounded education means that before this trial moves forward, both parties must give him a two-part, first-of-its-kind tutorial in climate science in no more than two hours each. It’s a highly unusual request from a judge, experts say, and it will give Americans the opportunity to follow along as big polluters finally go on record about climate science and climate denialism.

Judge Alsup has submitted 14 questions for each party in the case to answer, including:

What caused the various ice ages?
What are the main sources of CO2 that account for the incremental buildup of CO2 in the atmosphere?
Why hasn’t plant life turned the higher levels of CO2 back into oxygen?

Most of the 14 questions could be answered by a precocious fifth grader. But the hearing, according to Michael Burger, executive director of the Sabin Center for Climate Change Law at Columbia University, will be the first time oil companies defend themselves in court against decades of climate science....

[T]he people of California aren’t suing BP and co. for spills, explosions, or other easily traceable disasters. Rather, they’re suing because those companies:

knew about climate change decades ago,
continued doing business as usual, and
engaged in a world-wide public relations campaign to sow confusion over climate science.

California says the companies have been using deception to profit as the planet warms, and they should pay for the infrastructure the state needs to protect itself against rising sea levels.

The trial is set to get underway on Tuesday.

Mound, as you pointed out a few days ago, PM Trudeau is on the wrong side of history. He looks to be spending a lot of capital (both political and financial) trying to support the Tar Sands and the KM pipe. Ultimately, I think we will be stuck with a pipe nobody wants and Albertans will have wasted way too much on its stranded asset and have to live with the mess.

Whether it is California, New York or some other entity, eventually the suits will gain traction and the oil industry will wind up looking just like the tobacco industry and almost everybody will be disgusted with it.


Jebus, Toby, I so hope you're right.