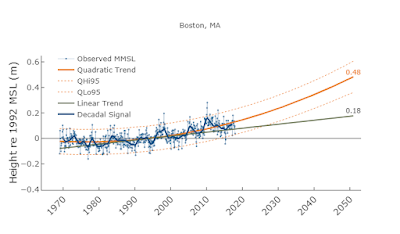 A report from the Virginia Institute of Marine Science projects that Boston could receive 1.5 feet of sea level rise (from 1992 levels) by 2050.

The report also shows that the rate of sea level rise isn't a linear constant but is accelerating as predicted by oceanographers and hydrologists years ago.

The data project's release comes amid heightened local focus on climate mitigation and adaptation, as Massachusetts was hit by three damaging nor'easters over the past two weeks.

On Thursday, Gov. Charlie Baker stood in coastal Scituate — which had flooded during the first of those storms — to announce a climate resiliency bond bill.

As NOAA put it in an analysis this week, "a sea level rise of 2 feet would more than triple the frequency of coastal flooding across the Northeast, without any change in storms."

Trump won the Mass. vote but Scituate voted for Clinton. I'm not sure how this will play out but I suspect that Scituate residents will get wet.


When I watch the inundation in this video, Toby, there's one word foremost in my mind, "salt." These houses are getting soaked in saltwater and anyone who lives near a coast knows how destructive that can be to a house. The salt is incredibly persistent. It gets through the wood framed houses, works its way inside, saturates the drywall and corrodes wiring and switches. For some reason I don't understand the salt is said to make the mold problem much worse and can require all the wiring to be replaced. What makes it worse is that, before anything restorative can be done, the salt has to be flushed out with repeated applications of fresh water.

Now this is the third nor'easter to pound these coastal areas in two weeks. How many of these inundations can these houses take before they're teardowns?

Agreed, salt would be a problem.

It's good to see a Republican governor face the reality of climate change, but $300 million ain't gonna cut it.

Who cares about Boston? We're Canadian. I live in Halifax, and we got those same three storms. Our coastline in Nova Scotia is being eroded at a great rate. Freshwater pools/lakes inundated with seawater, coastal roads obliterated. We are a low-lying area, the people can see the problem happening right in front if their eyes. Yet both federal and provincial governments sit on their hands for all intents and purposes. Time for a great Canadian Institution to happen on the matter: a Royal Commission. That way we listen to everyone gripe, write a report and then put it on the shelves we pre-make for such efforts. Snore.

Where the hell is Scituate? Are you sure you don't mean Skidegate?
One thing evident from the photos is the buildings are too close to the water. Another thing is they're hooped! You can't mitigate against that sort of power. Abandon ship and reassemble.

Well, John, since you ask it's about halfway between Boston and Plymouth, just south of Cohasset on the 3A.

@ Anon 6:44 - with your fatalist attitude, I think you're fucked. Why don't you write your premier and prime minister demanding action. Or run for office. Or, just snore.