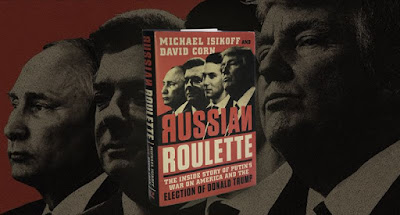 My impression of "Russian Roulette" is that Michael Isikoff and David Corn have produced a fine book, a worthy read, that happened to get overtaken by events. Had it been released two months earlier, it might have been a must read. If they revise it, rewrite the last seventy pages, to update what we've read and heard the past week, it could be rehabilitated.

The final chapters of Russian Roulette remain to be written. That will include the Mueller investigation and the new revelations emerging from the Cambridge Analytica scandals that may directly entangle Trump, Bannon, Trump's campaign team, even his new national security advisor, John Bolton. Half of this story, probably more, remains to be written.

Journalists covering the chaos also known as the Trump administration are frequently heard to complain that it's a thankless and brutal task in which the story they're working on in the morning gets superseded by something even crazier out of the Trump White House in the afternoon.  Good, important stories get spiked, often replaced by something frivolous yet outrageous. The record goes incomplete. That's the story of the Trump campaign and the Trump administration.

One thing that is clear from Russian Roulette is that everyone from Donald Trump to Hillary Clinton to Barack Obama to America's national security/intelligence agencies made disastrous calls based on the assumption that Hillary Clinton could not possibly lose to the Mango Mussolini.

Measures were not taken out of fear that, with Hillary a shoo-in, they might be seen as unfair to Trump.  Obama stubbornly refused when urged to act for this reason.

Hillary made her own mistakes, a load of them. In several ways she was the author of at least some of her own misfortune.

So far Mueller has obtained indictments against four of Trump's campaign/transition team: Mike Flynn, Paul Manafort, Rick Gates and George Papadopoulos, all but Manafort having pleaded guilty. There may be other, unannounced indictments. It's hard to imagine Carter Page not being charged. Steve Bannon has to be worried about what awaits him for his governance of Cambridge Analytica. Then there's the obstruction of justice and Russia collusion issues that have not yet broken the surface.

My conclusion - Russian Roulette is the first half of what could be a good book.

"Obama stubbornly refused when urged to act for this reason."

Nope, as Emptywheel notes, the Obama Administration was preparing a counterstrike against Russia, both public and cyber.

Obama made his " cut it out" phone call to Putin, after which 3 things happened.

Shadowbrokers, the Russian GRU released the NSA hacking and cracking tools online, all of which can only be used against Western Software, basically challenging The West to a full scale cyber war,

And in what history will record as the greatest act of treason in the 21st Century, Obama went to Mitch McConnel(R) and Paul Ryan(R) for Republican support against Russian Ratfucking of the US Elections, both of them sided with Putin and threatened to make any mention political,

So, Obama shut down the counterstrike.

I don't know Jay, re
"So, Obama shut down the counterstrike"
There is more to this story (or a different version?)