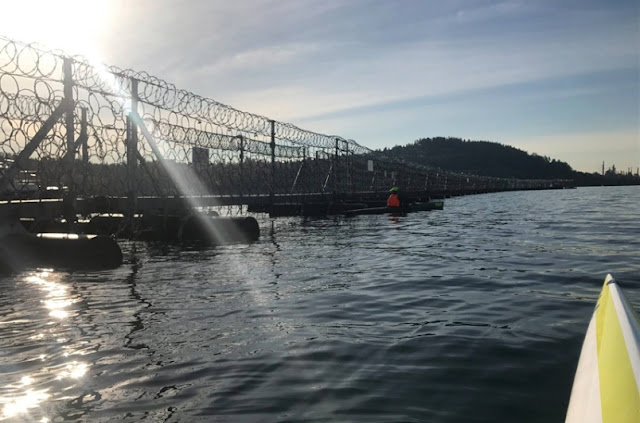 "A society that indulges in the mass arrests of its own citizens may not yet be a dictatorship, but nor is it any longer staunchly democratic. And things are decidedly slipping in the wrong direction — even with Prince Charming wearing the engineer’s hat on our debt-driven gravy train."

Michael Harris foresees a looming battle between ordinary British Columbians and their federal government, one that could see this government resort to force against us.

Too many advocates of the project have used the argument that since the Trudeau government has the legal power to impose the project on B.C., it should.

There is some merit to that. It is true that Ottawa has the legal and constitutional authority to declare any project in the national interest, trumping provincial objections. So far, that is what PM Trudeau has suggested he will do. Besides Trudeau’s declaratory powers, he also holds the enormous lever of the Emergencies Act, should he ever decide to pull it.

All the prime minister would have to do is decide that any public protest against the twinning of this American company’s pipeline across B.C. would be a “breach of the peace”.

Trudeau could also decide that protesters represented a threat to the national security of Canada’s critical infrastructure — whatever that may mean. Does laying down in front of a piece of heavy equipment constitute a threat to national security? Critical infrastructure was always assumed to mean things that were needed in the event of a crisis or war, and certainly not simply for the betterment of shareholders and jobs in swing ridings.

If the Emergencies Act were to be invoked, there would be no protesters on Burnaby Mountain because the government could ban all travel to and from the site. Kinder Morgan’s work site could be completely secured, like a G-20 venue or a military base. And if protesters moved to a new site, public assembly could be banned there too, and so on, and so on….

If you think that’s alarmist, consider this: Pierre Trudeau invoked the War Measures Act during the FLQ crisis. Some approved, some thought it too draconian. But that’s not the point. No one can deny that it lit a fire under the Quebec separatist movement. There have already been published reports that the same thing could happen in B.C., including an excellent article in the Georgia Straight.

Six years after 463 Quebecers were arrested on Pierre Trudeau’s orders, the separatist Parti Quebecois scored a landslide victory in Quebec. Almost 20 years later, the PQ very nearly took the province out of Canada in its second referendum.

And it’s not as if there are no heavy hands in Justin Trudeau’s government. Trudeau’s minister of Natural Resources, Jim Carr, mused about sending in the troops to deal with pipeline protesters in British Columbia

Polls have shown that 10 per cent of the population is prepared to engage in “direct action” to stop Kinder Morgan. Direct action is code for doing things that can land one in jail. There are more dedicated environmentalists in B.C. than any other place in the country.
...

It is also worth noting that the PM himself is developing something of an imperial style in these matters. He has used the RCMP to escort anti-pipeline protesters away from Trudeau-media events. He has also had police eject a “trouble-maker” from one of his public meetings. Which is not to say that official force must never be used, just that there’s more Stephen Harper in this guy than most of his followers are willing to admit.

Though Trudeau undeniably has the legal power to suffocate Kinder Morgan protests on Burnaby Mountain, he has lost the social license and moral authority to do so. Here’s why: The prime minister clearly reneged on promises to replace Harper era environmental assessments before allowing major resource projects like Kinder Morgan’s Trans Mountain expansion to go forward.

Though he was conspicuously, and brilliantly, generous in the recent budget with the re-funding of scientific research in Canada, he has ignored science in the case of Kinder Morgan — or at least he has in the opinion of great scientists like revered ecologist David Schindler.

Trudeau talks a good game when it comes to finding common ground, and sometimes he does, but he has utterly failed to do that on this file.

Some unsolicited advice to the PM: Sucking and blowing is not the best path to political longevity.
Posted by The Mound of Sound at 4:25 PM

I don't think there's much middle ground or room to compromise on this issue. You either meet Canada's environmental targets or you have new pipelines, but you can't have both.

Instead of building pipelines, the Canadian government would be far better off providing transitional funding to oil and gas producing provinces to get them converting to renewables. This would benefit the environment, employment and economy.

Cap, a couple of weeks ago I again emailed both our Prime Minister and our Environment Minister expressing essentially what you post here. I did receive automated got its but I don't expect either Trudeau or McKenna to even read what I sent. If David Suzuki has been cut off there isn't much hope for the rest of us. Our government is shutting us out.

Thanks for the effort, Toby. Unfortunately, today's leaders seem more interested in leading from behind than getting out in front of issues. I just don't get why anyone would want power only to exercise it to the detriment of their own children. This obviously puzzles Suzuki as well.

I was impressed with Obama. Alas he only looks good now in relation to his direct predecessor and successor. I voted for strategically young Trudeau ... and he has fallen below even my low expectations. (Mulcair much different? meh)

I do believe Corbyn is the real deal ... he has a consistent record going back decades to his youth. We need to find more Corbyns.

More grist for the mill.....
"The Current Onset of Climate Tipping Points"
https://www.counterpunch.org/2018/03/07/the-current-onset-of-climate-tipping-points/


Thanks for the link, NPoV. This Arctic winter fiasco has been troubling me for weeks, no years. I've written several items about it but found it so dispiriting that I left them as drafts. I just couldn't post them.

I'm convinced Dr. Glickson is right. We have one last opportunity, at best a chance, to possibly avert catastrophic runaway global warming. Yet it would be such a Herculean chore that the nations of the world would have to dig deep and come up with trillions of dollars in funding necessary to pursue every conceivable technique for decarbonizing our atmosphere.

That, of course, is not going to happen. It won't happen in the United States. With our Prince of Pipelines, Justin, it won't happen here. Just our two countries alone are enough to ensure this last opportunity never gets off the ground.

So I finally did a post incorporating Glickson's remarks. Thanks.