Harper Aide, Bruce Carson, Heading for Another Stretch in the Greybar Hotel 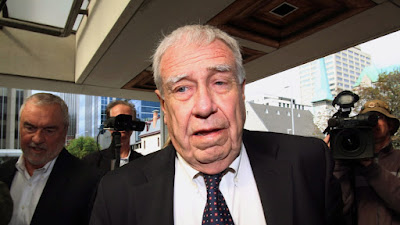 Like where in hell did he get the money to pay for an appeal to the Supreme Court of Canada?

Bruce Carson has lost an appeal against conviction for influence peddling. He had been acquitted at trial but the Crown appealed and won. Carson took that conviction to the SCC.

The Supreme Court of Canada has rejected an appeal by a former top adviser to Stephen Harper, upholding Bruce Carson's influence peddling conviction related to the sale of water treatment systems on First Nations reserves.

The ruling means Carson will return to court for sentencing on the charge, which falls under fraud offences and carries a potential prison term of up to five years.

In an 8-1 decision, the majority of justices adopted a broad interpretation of what constitutes "business relating to the government" under the Criminal Code section on influence peddling.


Harper tried to blame his PMO for not warning him that Carson had a criminal record and had served penitentiary time. Later Harper was forced to admit that he knew before he hired Carson and brought him into the PMO. Harper claimed he knew "some" of the history, not all. It was one of those situations (there were several) where Harper got caught in his own lies and had to backpeddle.

He's uglier than Harvey Weinstein! Can you imagine waking up beside HIM in bed!

When you are as old and rich as Carson is your partner quickly learns to sleep in, in the mornings, which tends to avoid that problem.