Tillerson's Firing Isn't the Problem. It's His Replacement That's the Scary Part. 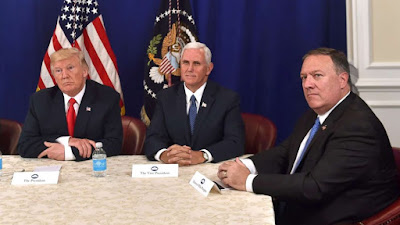 They're changing the guard at Trump's state department. Rex Tillerson got the boot this morning in a manner befitting the Mango Mussolini's notion of presidential propriety. He read about it, like everyone else, in a Trump early morning tweet.  When it comes to assholery, Trump never ceases to amaze.

Rex Tillerson never set the international relations community on fire. He never set anything on fire. America and the world might not be so lucky when his successor takes the helm at State.

Mike Pompeo, an extremely intelligent but even more extremely messed up man. First in his class at West Point and a law degree from Harvard. A cavalry officer, then lawyer, then entrepreneur, then congressman, Pompeo lists a net worth of a curiously minuscule $345,000.

Here are a few of his more worrisome attitudes, courtesy of WikiPedia:

Pompeo stated that "Congress should pass a law re-establishing collection of all metadata, and combining it with publicly available financial and lifestyle information into a comprehensive, searchable database. Legal and bureaucratic impediments to surveillance should be removed. That includes Presidential Policy Directive-28, which bestows privacy rights on foreigners and imposes burdensome requirements to justify data collection.

On terrorism, prisons and interrogations:

Pompeo opposes closing Guantanamo Bay detention camp. After a 2013 visit to the prison, Pompeo said, of the prisoners who were on hunger strike, "It looked to me like a lot of them had put on weight."

Pompeo criticized the Obama administration's decision to end secret prisons and its requirement that all interrogators adhere to anti-torture laws.

In February 2016, Pompeo said Edward Snowden "should be brought back from Russia and given due process, and I think the proper outcome would be that he would be given a death sentence".

On the environment and climate change:

Pompeo has stated, "Federal policy should be about the American family, not worshipping a radical environmental agenda." He has referred to the Obama administration's environment and climate change plans as "damaging" and "radical". He opposes the regulation of greenhouse gas emissions by the United States, and supports eliminating the United States federal register of greenhouse gas emissions.

Pompeo signed the No Climate Tax pledge of Americans for Prosperity.

He has called for the permanent elimination of wind power production tax credits, calling them an "enormous government handout".

In December 2015, as a member of the United States House Committee on Energy and Commerce, Pompeo voted for two resolutions disapproving of the Clean Power Plan implemented by the United States Environmental Protection Agency during the Obama administration.

Pompeo has stated that life begins at conception and believes that abortions should be allowed only when necessary to save the life of the mother.[61] In 2011, Pompeo voted for the No Taxpayer Funding for Abortion Act, which would have banned federal health coverage that includes abortion. Also in 2011, he voted for a prohibition on funding the United Nations Population Fund.

Pompeo is an evangelical Presbyterian. John Knox must be rolling in his grave.

Pompeo is a Christian religious conservative whose beliefs inform his politics. He spoke at length of how religion informs his political ideals on video at the Summit Church God and Country Rally 2015. In that speech he approvingly quoted the Robert Russell/Joseph Wright prayer which contained "We have worshipped other gods and called it multiculturalism. We have endorsed perversion and called it an alternative lifestyle." In his own words, he said "We are engaged in a struggle against radical Islam, the kind of struggle that this country has not faced since its great wars."

Then there's the little matter of Korea, North Korea that is, whose leader, Kim Jong Un is supposed to sit down for a chin wag with the Cheeto Benito. Trump's choice of Pompeo as America's top diplomat might just have thrown a wrench into those gears.

Pompeo desires regime change in North Korea. In July 2017, Pompeo said "It would be a great thing to denuclearize the peninsula, to get those weapons off of that, but the thing that is most dangerous about it is the character who holds the control over them today."

Chances are Kim knows about Pompeo and it's hard to imagine he'll be encouraged to make concessions to Trump after this appointment.

At Foreign Policy, they summed up Pompeo's appointment with eloquent brevity:

"When it comes to Trump’s foreign policy, things will get worse before they get better."

I'm not so worried.

As the Trump Administration has made clear to May, American allies are on their own,

It's been very clear, on everything from Afghanistan, Iraq, to social change and trade, America has become the Hapsberg Empire of 1913.

If we want to go forward in peace and prosperity, we have to abandon the dying carcass of America.

Enjoying the Kabuki Show?
"“It’s just figuring out your people. A fortune 500 CEO probably looked good to him on paper, but he meshes better with a junior rep from Kansas,” an administration official told The Daily Beast, referring to Pompeo, a former House member. “I wouldn’t read a seismic shift into it, but he’s definitely figuring out who he does and doesn’t like around him, and acting on it.”"
-Counterpunch

Actually I think the torturer at the CIA could be scarier than this puppet at State.
Neither will make much difference when tRump is calling the shots, but if congress confirms the well-known torturer that's a bad sign that the last shred of morality has left the building.

But hey, it has fueled another media cycle and helped cable news ratings and kept America Great!


NPoV, you've been hitting the cynicism a bit hard lately, don't ya think?


Jay, as you might know, I've long argued for a realignment of Canada's trade, foreign and military policy to offset a bit of our slavish ties with Washington. It will always be the elephant in our bed but we can do more to keep a safe distance.

.. Mound steals the comments section.. what surprise..
'the elephant in our bed'.. haha.. sweet