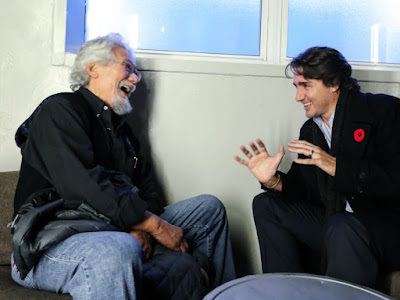 At 81, David Suzuki has declared himself to be in the "death zone," an apparent allusion to looming mortality that has given him greater impetus to speak out.

Since Justin Trudeau came to power, the prime minister's once cordial relationship with Suzuki has gone off the rails. The high point came at the Paris Climate Summit in 2015 when a freshly-minted prime minister Trudeau wowed everybody with a vow to limit global warming to 1.5 degrees Celsius. From there on the Suzuki-Trudeau comraderie went downhill.

I emailed him after he signed [the Paris accord] and asked, ‘Are you serious about what you just signed?’ And he emailed back and said, ‘I am very serious.’ We celebrated, we praised him, but the easiest thing to do is sign a document, especially when the end isn’t for years and years. He knows bloody well that he’s not going to be around in 2030. That’s what all politicians do. You can make a flourish and sign and claim but you’re not held accountable. And that’s a problem. We don’t have a way of holding people accountable.

So when Trudeau approved the pipelines, Kinder Morgan and [Enbridge's] Line 3, I emailed him and said, ‘You know, you set a hard target of 1.5 degrees. That’s your target. To meet that you know 80 to 85 per cent of those reserves have to be left in the ground. We can’t burn them. Why the hell are you investing in a project that is going to cost billions dollars and then, in order to get your return, that it has to be used for 25 to 30 years? This doesn’t make any sense!’ I said, ‘Why did you run for office? You’re in a position now to do something that is going to affect the future for your children. You’re a father first.’

And you know what his answer was? He didn’t answer. Up to that point he always answered my emails but he stopped answering them. The problem is, he’s a politician, and he’s a father, but If he wants to play the political game, being a father is irrelevant.

And as for the line Trudeau pitched to a crowd of skeptics in Nanaimo that Canada can pimp bitumen and meet its Paris Accord commitments, well:

That’s such a lot of bullshit! this is just political doublespeak: ‘We’ve got to keep burning more oil, more fossil fuels, in order to meet our reduction targets.’ What are you talking about? That’s such a crock of shit!

You don't have to be a major scientist to know that Trudeau's pipeline excuse is, as Suzuki so eloquently puts it, a total crock of shit.  Maybe if there was a shred of truth to it, Trudeau would enlighten us and explain how pipelines, bitumen pipelines, work to help us meet our emissions reduction promises.

As the interview continues, Suzuki discusses the malignancy of perpetual, exponential growth, the Holy Grail of neoliberals including our current regime.

[There is a] feeling that, in order for this economy to progress, you need growth. So growth has become the driving force by which politicians and businesspeople operate. If you ask a businessman or a politician how well did you do last year, within a second, they’ll know: this many jobs, this much profit, this much GDP. Everything is about growth.

I have two friends who started a company called Roots. They have been big supporters of mine, and [co-founder] Michael Budman told me, ‘I agree with everything you say. But if Roots were to submit a proposal to a bank [asking for] a loan and you submit a plan in which you don’t grow, you won’t get a loan!’

Because if you’re not growing you’re considered dying. But the drive for growth is a crate of cancer cells. Cancer cells believe they can grow forever. And they can’t. And it’s the same thing with our economy within the biosphere. It can’t grow forever.

The reality is you’ve got one big circle, the biosphere: the zone of air, water, and land, where all life exists. Within that there are 10 million little circles of different size. That’s each species. Within the human circle, the economy should be a tiny ring within that. But what we’ve got is one big circle, and one of the rings inside is 40 per cent of the circle. Humans have taken over 40 per cent of the net primary productivity of the planet. And of course when we take that over we drive all the other species to extinction. We’re trying to keep the economy growing so that it will be bigger than society and the environment. This is crazy.

So what [Raworth] comes up with is what she calls a “doughnut economy.” It’s absolutely brilliant. She’s saying there are limits imposed by ecology. Typically, economists like steady growth forever. What she says is we all exist within what she calls the ecological shield. These are all factors that will limit how much we grow. The ozone layer, land conversion, how much the Earth can sustain. We exist within a band underneath that shield. We have now exceeded those boundaries in a number of areas.

That pretty well pins it: Trudeau is a liar.

Trudeau is a major disappointment in so many ways. Very sad!

Yeah but he was kinda cute (ha-HA-ha?!)...societies soOo shortsighted *