Maybe Trump Isn't Totally Crazy After All. But, He Probably Is. 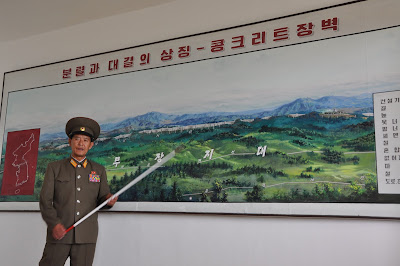 Even a broken watch is right twice a day.

Stymied by his inability to cajole Congress into funding his wall along the US/Mexico border, Donald Trump is approaching the problem from a new angle.

According to the Washington Post, Trump claims the US military with its record-setting funding should build the damned thing. Trump seems to be unaware that military spending is within the purview of Congress and they're in no mood to go along with his obsession.

This brought to mind Gwynne Dyer's book, "Climate Wars." Dyer, after discussing climate change with a number of Pentagon types, envisioned an eventual militarization of America's southern border along the lines of the Koreas' DMZ or demilitarized zone. He described it as an open, "free fire" killing ground to staunch waves of climate migration out of Central America. A border zone with walls, wire and robotic weapons designed to slaughter migrants without anyone having to actually pull a trigger. Out of sight/out of mind.
Posted by The Mound of Sound at 3:12 PM

Stymied by his inability to cajole Congress into funding his wall...

Wait, I thought the great deal artist was getting Mexico to fund it! No wonder Congress isn't interested.


I'll bet he could get a great deal by contracting the job out to the North Koreans. Apparently they work cheap and have just the sort of expertise Trump needs.

Treason Tribble will have to pry the money out of the Pentagon's cold dead hands.