You May Have Thought As Much. The Arctic's Freakishly Warm Winters are Causing Our Freakishly Cold Winters. 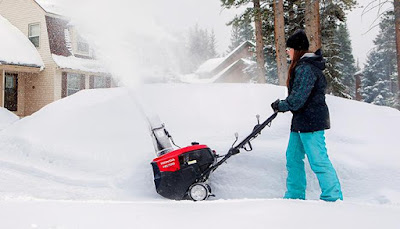 The last three or four years have seen freakishly warm spells in the dark of the Arctic winter. Temperatures 35 degrees Celsius have been recorded in the high north, well above the freezing point.

Meanwhile Europe and much of North America have been living with freakishly cold conditions.

You might have wondered if one had something to do with the other? Well we now know.

A sharp increase in temperatures across the Arctic since the early 1990s has coincided with an uptick in abnormally cold snaps in winter, particularly in the eastern US, according to new research that analyzed temperature data from 1950 onwards.

Extreme cold winter weather is up to four times more likely when temperatures in the Arctic are unusually high, the study found. Researchers compared daily temperatures from across the Arctic region with something called the accumulated winter season severity index, which grades winter weather based on temperature, snow fall and snow depth, across 12 US cities.

“There’s a remarkably strong correlation between a warm Arctic and cold winter weather further south,” said Judah Cohen, a climatologist at Atmospheric and Environmental Research. “It’s a complex story – global warming is contributing to milder temperatures but is also having unforeseen consequences such as this.”

The Arctic has just experienced its toastiest winter on record, with parts of the region 20C (68F) warmer than the long-term average, a situation scientists have variously described as “crazy,” “weird,” and “simply shocking”. The far north latitudes are warming around twice as quickly as the global average, diminishing glaciers and sea ice and imperiling creatures such as polar bears.

Two large winter storms recently swept the US east coast in less than a week, unloading up to three inches of snow per hour in places, resulting in several deaths, thousands of cancelled flights, closed schools and snarled traffic.

The cold front even reached Florida, contributing to a recent surge in manatee deaths. So far this year, 166 of the marine mammals have been found dead off the state’s coast, with stress from the cold the leading cause of mortality. “Manatees may join polar bears as one of the first iconic victims of extinction in the wild from climate change,” said Jeff Ruch, executive director of Public Employees for Environmental Responsibility.

The US storms follow freezing winds from Siberia – dubbed the ‘beast from the east’ – that battered parts of Europe, with the British army deployed to help liberate hundreds of stranded drivers on UK motorways.

“This winter is a great example of what we can expect from climate change,” said Cohen. “In the US we had the ‘bomb cyclone’ in January, followed by July-like warm weather in February that I’d never seen before. And now we’ve had a parade of powerful winter storms and the beast from the east. It’s mind boggling.”

Things are getting wilder than predicted, Mound. You'd think these signs would focus our attention.

A while back there was a made for TV movie based on a theme that by changing the major air and sea currents such as the Gulf Stream Global Warming triggered a new ice age. The movie ended with New York buried under so much snow that only the tallest buildings poked through and survivors migrated to Mexico. I think of this fantasy every time I read articles such as this. Disrupting the natural balance will screw all of us.


You might think that, Owen, but you would be mistaken. By the time that public opinion is strong enough to force the political caste to take meaningful action there's a good chance it will be much too late.

These freakish warm spells in the midst of the long Arctic winter night are but one of several aspects of the change now rapidly setting in across the high north. The loss of Arctic sea ice, the retreat of the major ice caps, the warming of the Arctic oceans and northern lakes triggering the thaw of frozen methane clathrates, the drying out of the tundra exposing the underlying methane and CO2 laden permafrost beneath to thawing, all suggest a major climate tipping point has been passed. The region is so sparsely populated and inaccessible that it has defied any reasonably precise estimate of how much GHG is now entering the atmosphere from these natural feedback mechanisms. These dire predictions we keep getting from scientists are still largely based on man-made inputs. No one seems to know how full nature's powder keg may be.

And our government's response isn't to rally the public to the fight against climate change. It's estimated that rehabilitating our essential infrastructure could cost a trillion dollars for Canada alone. The government has no plan to raise that kind of money even though it's plain that the cost of doing next to nothing,the status quo, will be far greater. And they expect us to be obedient to their dereliction of their most fundamental obligation to the state and our people. They're not going to change. At some point we'll either have to consign our kids to go down with them or else we'll have to turn on them. For almost all my life I never imagined I would have to say that. Times change.

Probably the dumbest comment we ever hear is, "It can't happen here."

It's not a fantasy. The summer freshwater flows from the Greenland area of the Arctic are one of the drivers of the Gulf Stream, and the Gulf Stream, is what renders much of the East Coast from Virginia north, Iceland, the UK, parts of France and Scandenavia, temperate.

Historically, even minor weakenings or diversions of the Gulf Stream caused massive famines and human migrations in the past.

If it fails perhaps there is....
"restarting the Gulf Stream’s thermohaline cycle. (“Putting salt in the ocean,” one of the Tibetans quips ironically. “Good idea.”)"

from KS Robinson's 50 Degrees Below


We do seem to be clutching at man-made solutions to these potentially existential man-made crises. Einstein reminded us that "We cannot solve our problems with the same thinking we used when we created them." Most of these geoengineering ideas seem designed mainly to preserve some unwise status quo, thereby avoiding or delaying the real change necessary to arrest or perhaps even reverse them. Playing for time by desperate attempts at ersatz fixes is probably only going to worsen the underlying problem by masking immediate impacts. That's my take, anyway.

We also seem to be actively avoiding real solutions. One of them could be nuclear power but we have become so afraid of it that we won't even listen to the science. Thorium and/or fast fission reactors are much safer and much more efficient. They can solve our power problem. The best part is what they use for fuel: that nuclear waste form the older reactors that we now encase in concrete and store at the bottom of mine shafts. Bonus!

We are a strange species. We will jump on the fear band wagon won't listen to either the scientists or just plain facts. We kill more people with automobiles than with nuclear power plant accidents but you will spoil the party if you mention that.