Well, Kids, Uncle Donnie Has Plans for Your Future and They Involve a Lot of Carbon 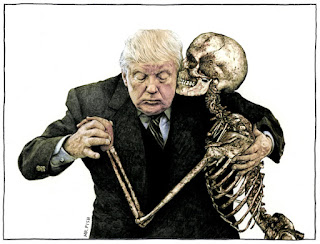 Is Donald Trump about to unleash a fossil energy disaster on the world? CBC News reports that Trump is after nothing less than "energy dominance" and he's not talking renewables either.

Fuelled by technological breakthroughs and cuts to taxes and regulation, the United States is on target to become the world's biggest producer of crude oil in the next five years.

Let that sink in. The U.S will be bigger than Russia and Saudi Arabia.

It would be a remarkable feat and significant, too. It could clear the way for America to redefine its relationship with the world, minus a reliance on overseas oil.

The implications are huge, if hard to predict.

Might it bring chaos if the U.S. chooses to exit the Middle East? Or will it spur Washington to try to broaden its influence? Could Canada, Mexico and America forge an alliance to influence oil prices?

Such questions were purely academic a decade ago.

Now they're part of a broad debate around the potential for American energy self-sufficiency or, in the words of U.S. President Donald Trump, a new "energy dominance."

In fairness, this is a CBC "business" story but the decidedly fossil fuel friendly Broadcasting Corporation's discussion of "implications" are all trade and market oriented, complete with commentary from the Cato Institute. There'll be no whiny tree-huggers in this story.

It's hard to argue the claim that "the implications are huge" but they're not all that "hard to predict."

There's already a glut of oil on the market. Another giant producer feeding that same market will shift the supply/demand curve and potentially drop world prices.

When the price of fossil fuels goes down, usage increases. Another implication is the extent to which fossil prices impact the alternative, clean energy markets globally.

Anything that might worsen the glut and negatively impact world energy prices also worsens the economic viability of the Athabasca Tar Sands, the highest cost ersatz oil on the planet.

The biggest impact, however, is also the most certain. Increasing production and consumption of fossil fuels means sabotaging hopes for a low carbon/no carbon future on which depends our dwindling chances of averting runaway global warming.

Not for nothing did Hans Joachim Schellnhuber warn the delegates at the 2015 Paris climate summit that our hope for a survivable future depended on an "induced implosion" of the fossil energy giants. What he was calling for was prompt government action to speed up the transition to clean energy and shut off most fossil energy production.  Donald Trump seems intent on putting paid to that idea.

By trying to rely on fracking and coal America will wake up one day soon to find the world has left the environmental disaster called the US behind.

It's been certain for a while now that the Tar Sands are no longer economically viable. Alberta is headed for an earthquake.