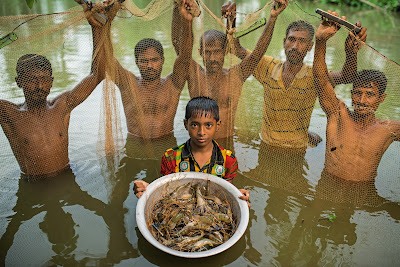 Several years ago I stumbled upon a US FDA report on imported shrimp (prawns). It listed, month by month, the number of shrimp imports from Asia that were discovered to be laced with very powerful veterinary antibiotics that were definitely not safe for human consumption. My curiosity piqued, I set out to learn more.

I'm rather partial to our local spot prawns, especially when you can buy them right off the boat. They're a pretty good size but they don't compare with the much larger imported tiger prawns.

The tiger prawns are farmed. They tend to be raised in rice paddies or mango forests along riverways. The farmers and their families often live on site in bamboo houses on stilts. That didn't look quite right so I followed it up and, sure enough, the water beneath them where the tiger prawns were being raised was also their sewer system. Sure do grow big prawns.  Ever since then I've steered absolutely clear of these imports that regularly appear on restaurant menus.

To test for the potential of antibiotic-resistant bacteria, Marketplace bought 51 frozen shrimp products from major grocery stores in Calgary, Toronto, Saskatoon and Montreal, and sent them to a special lab at the University of Saskatchewan for analysis.

Nine of the products — or 17 per cent — were found to be carrying bacteria, such as E. coli and staph aureus, that showed resistance to at least one antibiotic.

All but one of the bacteria were resistant to multiple drugs, meaning they have the potential to cause hard-to-treat infections — so called superbugs that antibiotics may not be able to kill.

In an email, the Public Health Agency of Canada (PHAC) told Marketplace the results were "of concern" as the resistance genes found "can move between bacteria."

What to do, what to do? At the moment there is an ample supply of wild prawns fished from the Sea of Cortez or off Argentina. They're decent. If you're near the east coast you can get Atlantic Canadian Northern Shrimp. Here on the wet coast you can choose between spot prawns and side-stripe. Just know what you're buying and where it's from.
Posted by The Mound of Sound at 2:01 PM

.. will be looking up access to spot prawns and side strip.. wet coast variety.. available in Toronto
We do like a tidy app of lobster tail - garlic butter as well.. yet shrimp (medium to large) - prawns (medium to large), and crayfish are our home cookin gold standard.. but .. scallops slay too.. and fiddlehead greens, baby Canadian asparagus, steamed broccoli plus wild rice..

Currently we do buy the 'valu packs' approx 8-10 $ frozen, 16-24 a bag and either sizzle in small pan or chop and add to various dishes - jambalaya, pasta & soups etc.. at times I do thrive on, thaw, dip in sauce, eat.. with spicy Caesar with pickled gsrlic bean.. But BBQ I favor black shrimp - heads on at 5.99 lb medium small at Danforth Grocery.. an eclectic busy carribbean oriented biz. They have grouper too..

Always good to adapt.. move along smartly.. get shrimp wise.. Thanks !


Yeah, Sal, when you're looking at those black shrimp you might want to first find out where they're from.

I always look to see where shrimp come from. I have seen those shrimp pools and smelled them. Anyong.