Oh, To See Ourselves as Others See Us 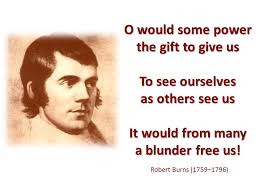 Full disclosure: the only reason the SNC-Lavalin scandal matters to me is that it might clear a path for Andrew Scheer's Tories to win the October general elections. That's it. I am not a Liberal, that's behind me. The last 20 years were enough that I'll not return to that fold. I just don't want Chuckles as the next prime minister of Canada.

Viewing this scandal from that distanced perspective, the most interesting part has been to watch Liberals picking at their skin, eating their hair and, at times, showing their true colours. Turns out they're not all as enlightened as they would have us believe in more tranquil moments. And they are pretty quick to turn on each other, sturm und drang.

I was a bit shocked as I read the comments on a particular Justin Trudeau fan page. The attacks on Wilson-Raybould and Philpotts were nasty and sometimes pretty misogynistic. What do you expect when you put that many women in cabinet? Women, they're so easily manipulated. What about that business with the apple in the Garden of Eden? None of these good and loyal Trudeau fans rebuked those leaving these bigoted comments.  No, Jody and Jane were only getting what they had coming. Imagine, mere women speaking out against Justin.

So this, to me, confirms that the Liberal ranks include more than a few bigots. As I let those comments sink in they reminded me of the vitriol I usually associate with the rightwing commentariat, confirming that the latter day Liberals are as tribal as any of these outfits.

The biggest story, however, is the insurgency afoot within the Liberal ranks. There is one person who stands out, a person who seems bent on taking down Justin Trudeau regardless of the lasting damage it may cause the Liberal Party. This individual seems determined to sow as much dissent among the Liberal rank and file as he can. This person is clearly going after the already disaffected Liberal voters.

What is the game? That's an important question with general elections eight months away. Has this individual just been waiting for an opportunity like the Lavalin controversy to pounce? A lot of effort is going into this and it's relentless.

Has this person decided to cut ties with the Liberals, to turn on them? Is this the parting gift? Is this an emotional matter, pent-up anger over being unloved by the Trudeau team, shunted aside?

I can't imagine how the Insurgent will ever again find a place at the Liberal head table, that is unless the Liberal hierarchy are much more craven than I had imagined.

Not that advice from a defector is particularly wanted but I think the Liberals really need to figure out who they are and just what, if anything, they still represent.  Just as today's Republicans would make Lincoln puke, I think these Latter Day Liberals would be shunned by the likes of Laurier, St. Laurent, Pearson and Pierre Trudeau.

Until now the current class has been content with the success they’ve achieved by not being anything and representing nothing. They say what they say for electoral purposes only.

Some of the commenters referenced are likely aware of this, thinking that they’re key members of the team. Maybe they are. They may just as well be CRAP Party supporters.

Susan Delacourt had something interesting to say on the Current this morning. She said that only about 39% of caucus supports JWR/JP but with the two of them gone cabinet is solidly behind Trudeau.

If this is a coup attempt, which I believe it is, it is failing.

What strikes me, Mound,, is that the two cabinet resignations are clearly a repudiation of the party leadership under Justin Trudeau. It leaves me wondering what else we don't really know about this emperor bereft of clothing.

Yesterday I heard what Rumley is pointing out - the rest of the cabinet has rallied behind Justin. There are probably several reasons for this. Politicians do tend to have a wide range of motivations so it's probably unwise to take this as a rousing vote of confidence for the prime minister.

They're all hoping to get re-elected in eight months and the prospect of the caucus succumbing to a Theresa May type of internal rebellion must be terrifying. Those whose personal political aspirations are to be weighed against Trudeau's transgressions might have reason to be somewhat less principled than Philpott.

I'm not saying that the hangers-on are just in it for themselves. I recall vividly what it was to be a Liberal who had to hold my nose to vote for the party. I did. That didn't make me feel good. Ordinarily I made my choice by what might befall the country should the wobbly Liberal lose to the Tory rival.

What I am saying is that the balance of cabinet rallying behind the prime minister is no surprise nor is it particularly meaningful any more than it portends unanimous support for Justin Trudeau.


Lorne, you could drive yourself mad with that sort of speculation. We still don't have the back story of the Insurgent, what he's really up to, what he's after. That's the trouble with Fenians. You never know when you'll hear the raiders riding into town.

That insurgent is banking on Jody taking over the Liberal leadership when Trudeau resigns. This is a freaking coup d'etat, the goal is to put Jody in charge. This insurgent your talking about and his wife have close ties to Jody, if she goes after the leadership, she will take them with her.

The Insurgent is a sad excuse for a former Liberal political operative that holds a serious grudge against PM J Trudeau. That Insurgent even ran Conservative ads on his "blog" during the last federal election. (Oh, and according to that Insurgent, Chretien was the greatest PM ever. As for Adscam ... nothing to see here.)

Gyor, UU - Do you really believe JWR is plotting with the Insurgent to topple JT? I have trouble imagining that. It would be too obvious even for the Liberal Party. Where would they muster the support for such a coup?

If Jody does have her eye on the premiership I think WK would be more of a liability than an asset. Has he ever distinguished himself as a kingmaker in the past? If so I'm not aware of it.

JWR’s inability to speak French makes any leadership plans optimistic. WK is making some sort of play-i don’t know what the object is, barring plain revenge for the Liberals not giving him some exalted position.

The Liberals are dropping in the polls and the Conservatives are in majority territory. The idea is likely to continue fermenting panic in the caucus to drive some sort of intiative to push Trudeau out.


Clarke, I suppose you're right about Jody's French-language problem. What I don't get is what the Insurgent is really after. He's investing so much time and effort into stirring up discord that it is hard to believe it's the "lover scorned" syndrome.

When it comes to narcissism, I have him second only to the Mango Mussolini. We know that Trump's ego drives him to find ways to settle scores, no slight goes unpunished. Could that same flaw be in play here?


I forced myself to listen once more to the last "KinsellaCast" podcast. He sounded awfully demeaning to his wife. She wasn't happy.

He mentioned one thing I hadn't thought of. His PR shop, the "Daisy Group," has developed a few First Nations clients. Could that be why he's cozying up to JWR? Is it business promotion? Maybe he sees his future in the Liberal realm drying up rapidly. It sounds as though Mrs. K. went to Ottawa recently to lobby for FN clients. Who knows? Not me, that's for damn sure.

I don’t know what his end goal is, but he is utterly incapable of burying the hatchet. His career during the Martin period, and then since working for Ignatieff has been one big FU to the Liberals. Since JT turned him down as a candidate he has had a hate on for him in particular. It may be just too inflict damage on Trudeau, as it would hard too imagine him allying with chuckles.

Obviously, digging up clients for Daisy is an ongoing objective. He has been waving the aboriginal flag quite a bit in the last few years, not that it has any particular impact on his political stances.


He absolutely raved about Christy Clark, at one point describing her as the most popular premier in Canada and he was close to some of her top aides. Seems a bit odd for someone with such intense ties to everything First Nations.

On the question of the Conservatives gaining power--the vagaries of our first-past-the-post system have left me in the bizarre position of wishing all the best to Maxime Bernier. Split that right wing vote, Maxime!

.. the 'keystone' of your post is the 'spectre of Scheer' and an elected Government of the rump ReformaTory factional sainthood crusaders. The bizarre pulpit for the scenically illustrated adoration of all things Trudeau or the mildly hysterical public defender of all things Ms Wilson-Reybould are duly noted.. and full disclosure, the salamander and the related horde stuck their lowly snouts into both furors..

pfft.. we thrive on fire and brimstone. The auteur from Montreal was to no surprise here, kind enough to respond.. he or she was a stalwart daily hero as Stephen Harper & buddy boy Ray Novak attempted another 4 year term lying to Canadians & laying waste to our environment, habitat and species.. democracy, transparency, accountability, decency.. be damned..

The other, a lawyer.. gets slack cut evermore for he and his wife's extremely risky but successful takedown of our local rascist, mysogenistic, cretinous 'local news toxic spew' .. His motive or rationale .. well, we dunno. Why the very first hug from Ms Wilson-Reybould to an observer, went to his wife (who was present at the Justice hearing) is a mystery. That he has some affection for Ms Christy Clark is startling.. She of course has her own scandal ridden legacy to deny.. but may not be able to obstruct while unelected. Certainly she has vast experience with Parliamentary Clerks run wild and parachuted partisan debris, Chiefs of Staff etc donated by tainted or captured Governments and political parties

Currently Trudeau is burdened by four resignations.. yes, though MainMedia cannot count that high. They keep forgetting or omitting Scott Brison.. and that incoming political missile which involves every single 'player' in l'affaire Lavalin.. Yes, the ex Commander Norman Criminal Trial. Obviously its to Trudeau's salvation, they (uh oh.. Ms Roussel - Director of Prosecution) to dismiss the charge before Ms Henein massacres them all over again, chapter and verse for obstructing Justice, withholding Defense discovery docs.. you name it

The 'trouble with normal.. is it always gets worse' (Bruce Cockburn) ..
but here comes Trudeau.. ready to hand Canada over to scumbag Andrew Scheer Inc

Do you want to learn about some easy business tricks? Amazon FBA is better than anything I guess that can be done to earn money online at home. The responsibilities of your products is upon Amazon if you want to do business with this online shop. This is very profitable and simple.