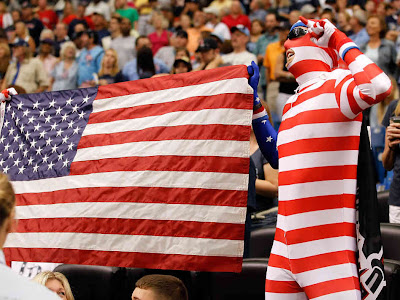 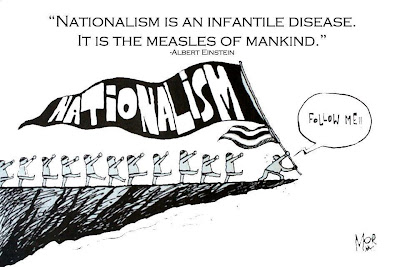 The United States is many things but it's not the greatest country in the world.  It has a chequered past and a chequered present.   Yet from mainstreet Hicksville, Arkansas to Capital Hill, Washington, you'll find Americans ordinary and powerful chanting the mantra of their nation as the greatest country in the world, the natural leader of all lesser states.   They don't just say it, they believe it, and that shapes their view, not only of themselves but also of you.

Writing in The Guardian, Glenn Greenwald gives a cautionary warning of the perils of 21st century American exceptionalism.  He was particularly taken with a couple of tweets by National Reviews's Charles Cooke reacting to North Korea's recent nuclear weapon test:

"I never understand the moral equivalence on this.   We can have nuclear weapons because we're right.   They can't because they're wrong."

"Why should we condemn North Korea's test?  Because they're a totalitarian nightmare state and this is the greatest country in world history."

It's certainly true that Americans are justifiably proud of certain nationalistic attributes: class mobility, ethnic diversity, religious freedom, large immigrant populations, life-improving technological discoveries, a commitment to some basic liberties such as free speech and press, historical progress in correcting some of its worst crimes. But all of those virtues are found in equal if not, at this point, greater quantity in numerous other countries. Add to that mix America's shameful attributes - its historic crimes of land theft, genocide, slavery and racism, its sprawling penal state, the company it keeps on certain human rights abuses, the aggressive attack on Iraq, the creation of a worldwide torture regime, its pervasive support for the world's worst tyrannies - and it becomes not just untenable, but laughable, to lavish it with that title.

This is more than just an intellectual exercise. This belief in America's unparalleled greatness has immense impact. It is not hyperbole to say that the sentiment expressed by Cooke is the overarching belief system of the US political and media class, the primary premise shaping political discourse. Politicians of all types routinely recite the same claim, and Cooke's tweet was quickly re-tweeted by a variety of commentators and self-proclaimed foreign policy experts from across the spectrum.

Greenwald then drew upon this passage from Orwell's Notes on Nationalism:

"All nationalists have the power of not seeing resemblances between similar sets of facts. A British Tory will defend self-determination in Europe and oppose it in India with no feeling of inconsistency. Actions are held to be good or bad, not on their own merits, but according to who does them, and there is almost no kind of outrage — torture, the use of hostages, forced labour, mass deportations, imprisonment without trial, forgery, assassination, the bombing of civilians — which does not change its moral colour when it is committed by 'our' side . . . The nationalist not only does not disapprove of atrocities committed by his own side, but he has a remarkable capacity for not even hearing about them." 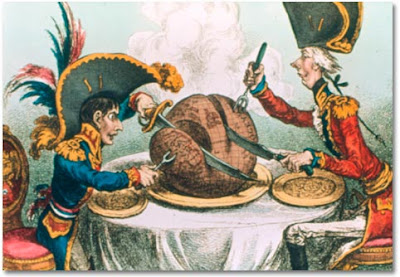 Preserving this warped morality, this nationalistic prerogative, is, far and away, the primary objective of America's foreign policy community, composed of its political offices, media outlets, and (especially) think tanks. What Cooke expressed here - that the US, due to its objective superiority, is not bound by the same rules as others - is the most cherished and aggressively guarded principle in that circle. Conversely, the notion that the US should be bound by the same rules as everyone else is the most scorned and marginalized.

...US foreign policy analysts are permitted to question the tactics of the US government and military (will bombing these places succeed in the goals?). They are permitted to argue that certain policies will not advance American interests (drones may be ineffective in stopping Terrorism). But what they are absolutely barred from doing - upon pain of being expelled from the circles of Seriousness - is to argue that there are any legal or moral rules that restrict US aggression, and especially to argue that the US is bound by the same set of rules which it seeks to impose on others.

...think tank "scholars" don't get invited to important meetings by "national security professionals" in DC if they point out that the US is committing war crimes and that the US president is a war criminal. They don't get invited to those meetings if they argue that the US should be bound by the same rules and laws it imposes on others when it comes to the use of force. They don't get invited if they ask US political officials to imagine how they would react if some other country were routinely bombing US soil with drones and cruise missiles and assassinating whatever Americans they wanted to in secret and without trial.

One gets invited to those meetings only if one blindly affirms the right of the US to do whatever it wants, and then devotes oneself to the pragmatic question of how that unfettered license can best be exploited to promote national interests. 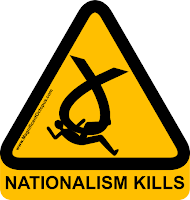 But why should this matter to us?   One reason is the Lockheed F-35 and what it means for Canadian foreign policy, Canadian defence policy and even our independence.   You may think of it merely as a ridiculously expensive airplane, possibly because that's all your hear from the Opposition parties, but it's far more than that and we stand to pay dearly if we don't see this clearly and in time.

This light attack bomber begs the question of who we're planning to attack, what we intend to bomb?  Better yet, given that we can barely afford to buy a paltry 65 of them, who are we going to bomb with a handful of these warplanes and what do we have in mind if the people we bomb decide to repay us in kind? Hmmm.

But, you see, it's not who we intend to bomb that matters.   It's who some other country wants to bomb that matters.  No, if Canada's light attack bombers are sent into combat it will be as part of a "coalition" which means under the command of someone who almost certainly believes he represents the greatest country in the history of the world.   See where this is going?

The F-35 is Canada's admission ticket to the Aerial Foreign Legion of a master country that not only preaches exceptionalism but practices it at the end of a barrel.  It's a nation that believes itself so exceptional as to stand above its own constitution.   It is a nation that believes it has the right to torture, to imprison its own citizens indefinitely without trial, to kill its own citizens without charge or trial, to invade foreign countries and lay waste their populations on connivance and the flimsiest of pretences.

What they're thinking and believing matters and it could matter a great deal if we allow our foreign policy and our defence policy to be hijacked by American exceptionalism.   The Liberals and New Democrats should be standing up for Canada on this.   They aren't.  Why not?

This crystallizes many of the various reasons why I do not travel to the US any more. Too bad Canada is marching in lock step with them.

It is indeed too bad that we're so unquestioning about the ramifications of so much of our decision making.

As a young reporter, way back when, I learned that there's almost always a back story that is often more interesting and important than the front story, the press-release story, that is usually the one fed the public. It's a rarity today to find the back story brought to the public perhaps because it rarely suits the interests of our corporatist media cartel.

If you have the opportunity, I'd take a look a book by social critic Morris Berman named "Dark Ages America" that explains how America's attitudes towards other nations mirrors the attitude of its people.

Essentially, the American worldview is a Manichaean one, that is, it views the United States is the Ultimate Good in the world, struggling against some Ultimate Evil. Who that Ultimate Evil is has changed over time - first it was the British, then the Spanish and Mexicans, then the Germans and Japanese, and then the communists. They were adrift without an enemy during the 90s, but fortunately for Americans, Osama bin Laden came along and provided them with a whole new enemy to despise.

The problem with this Manichaean viewpoint is that it is hardly conducive to self-criticism. After all, if you're the Ultimate Good, anything you do must be just and righteous, and any action, no matter how abominable, is justified. Hence why the attacks of 9/11 are considered the work of "crazed fanatics" who "hate our freedom" instead of being blowback from American foreign policy in the Middle East. Hence why Americans constantly denounce things as "Un-American," a thoroughly ridiculous term, if you ask me. Have you ever heard someone from England refer to someone as "Un-English?" Or someone from Norway calling a fellow countryman "Un-Norwegian?"

This is a very deluded and self-destructive mindset, and I wouldn't be surprised if it is one shared by our prime minister.

Thanks for that, Doctor. I found a copy at a reasonable price at Abe books and should have it in a couple of weeks.