Rob Ford is At It Again?

I'm a long way from Toronto, a good long way, and people like mayor Rob Ford make me kind of grateful for that.   Distance also let me avoid taking part in any of the commentary on Ford's recent legal troubles.   Besides he emerged out of it seemingly contrite and said he'd learned his lesson.

Then it emerges he's back at it again, sending hand-signed letters to lobbyists soliciting funding for his football foundation. 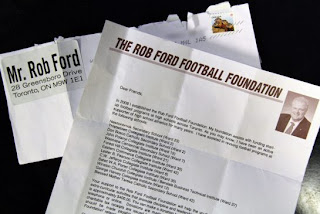 Andy Manahan, executive director of the Residential and Civil Construction Alliance of Ontario, said he received a letter on Jan. 28 — only three days after Ford won his appeal in the conflict of interest saga that began with his decision to solicit donations from lobbyists in 2009.

Manahan first registered as a lobbyist in 2008. He said he is currently lobbying on an entirely uncontroversial issue, improving the procurement process, and that he finds this Ford “indiscretion” less serious than others he believes Ford has committed.

But he added: “You never know what a mayor’s office could do to put a monkey wrench into your dealings with the city.”

“I don’t think it’s appropriate to take those sort of lists and send out letters to people who have dealings with the city,” Manahan said. “Again, there could be repercussions. There’s potential.”

We really have to stop treating these types as decent members of society.   They're vermin, scum, cockroaches.
Posted by The Mound of Sound at 11:29 AM

I think one of the problems last time was that he was using city letterhead.

These appear to be sent by himself as a private citizen.

The question becomes whether he would have sent these letters to these individuals but for their employment as lobbyists? Res ipsa loquitor.