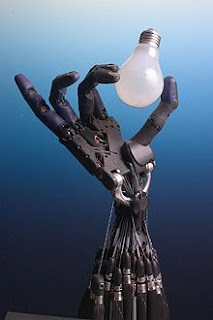 We are steadily, inexorably it seems, leaving the world of manual labour.   Even the Chinese are beginning to turn to robotics to replace low-wage workers.  So, how do entire societies live when machines have taken their work?  An interesting problem that invites interesting solutions.

During the Industrial Revolution, working hours increased by 20% as factories replaced feasting. With our post-machine standard of living, we can afford to shed some of the Puritan guilt that has, for centuries, kept our noses to the grindstone.

Today we find a great deal of work-sharing in poor countries. It is the accepted means of making a limited amount of available work go around. Economists call it "disguised unemployment".

If escape from poverty is the goal, disguised unemployment is a bad thing. But if machines have already engineered the escape from poverty, then work-sharing is a sensible way of "spreading the work" that still has to be done by human labour.

If one machine can cut necessary human labour by half, why make half of the workforce redundant, rather than employing the same number for half the time? Why not take advantage of automation to reduce the average working week from 40 hours to 30, and then to 20, and then to 10, with each diminishing block of labour time counting as a full time job? This would be possible if the gains from automation were not mostly seized by the rich and powerful, but were distributed fairly instead.

Rather than try to repel the advance of the machine, which is all that the Luddites could imagine, we should prepare for a future of more leisure, which automation makes possible. But, to do that, we first need a revolution in social thinking.

And, make no mistake about it, we are on the cusp of a revolution in social thinking.  18th century economics, 19th century industrialism and 20th century geopolitics - the forces that have been the template of our societies for generations - are rapidly losing their social utility.   They provide few answers for the real problems of the day and of tomorrow - climate change, resource depletion and overpopulation.   They can merely provide responses, not solutions, and, unfortunately, the time for mere responses is long past.

Our old institutions can't offer much beyond the sort of authoritarian oligarchy that is taking hold today and that can only progress to a sort of neo-feudalism leading to revolt and likely chaos.  The alternative is for a revolution in social thinking that leads to a new, orderly society that serves the many, not merely the few.

Sorry, kids, but we can't pretend we're still in the 80s any longer.
Posted by The Mound of Sound at 9:05 AM

Interesting article the only thing I would like to point out is that Luddites weren't against technology. They were fighting against the centralization of technology and the destruction of the decentralized human scale cottage/village manufacturing industry.