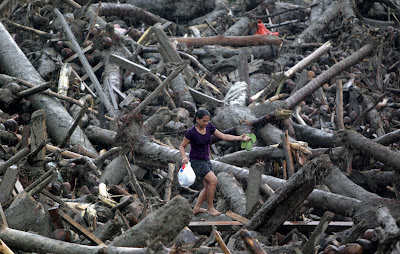 It's not a couple of low-lying islands about to sink under a risking sea.   It is the 7th-most populous country in Asia, 12th in the world.
Its 92-million people are scattered throughout the 7,100 islands that make up their country and cover 300,000 sq.kms.  And, right now, they're reeling from the savage impacts of climate change.   The Philippines may have become the poster child for global warming.

The Philippines experiences an average of 20 typhoons a year (including three super-typhoons) plus numerous incidents of flooding, drought, earthquakes and tremors and occasional volcanic eruptions, making it one of the most naturally disaster-prone countries in the world.

But more disturbing than [Typhoon] Bopha's size was the fact that it appeared to reflect rapidly deteriorating climatic trends.
The five most devastating typhoons recorded in the Philippines have occurred since 1990, affecting 23 million people. Four of the costliest typhoons anywhere occurred in same period, according to an Oxfam report. What is more, Bopha hit an area where typhoons are all but unknown.

The inter-governmental panel on climate change says mean temperatures in the Philippines are rising by 0.14C per decade. Since the 1980s, there has been an increase in annual mean rainfall. Yet two of the severest droughts ever recorded occurred in 1991-92 and 1997-98.

Scientists are also registering steadily rising sea levels around the Philippines, and a falling water table. All this appears to increase the likelihood and incidence of extreme weather events while adversely affecting food production and yields through land erosion and degradation, analysts say.

Mary Ann Lucille Sering, head of the Philippine government's climate change commission, is in no doubt her country faces a deepening crisis that it can ill afford, financially and in human terms. Typhoon-related costs in 2009, the year the commission was created, amounted to 2.9% of GDP, she said, and have been rising each year since then. 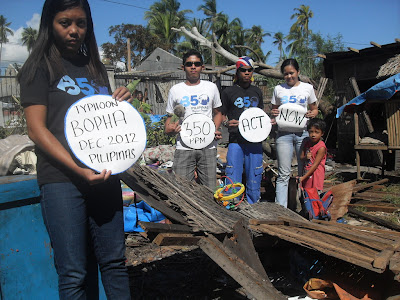 "Extreme weather is becoming more frequent, you could even call it the new normal," Sering said. "Last year one typhoon [Bopha] hurt us very much. If this continues we are looking at a big drain on resources." Human activity-related "slow onset impacts" included over-fishing, over-dependence on certain crops, over-extraction of ground water, and an expanding population (the Philippines has about 95 million people and a median age of 23).

"Altogether this could eventually lead to disaster," Sering said. Unlike countries such as Britain, where changing weather has a marginal impact on most people's lives, climate change in the Philippines was "like a war". Opinion surveys showed that Filipinos rated global warming as a bigger threat than rising food and fuel prices, she said. 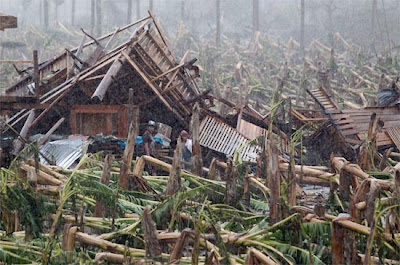 What the Philippines reveals is how climate change interacts with and magnifies other challenges, turning moderate problems into major threats.  If you're an archipelagic nation, excessive reliance on limited groundwater resources combined with rising sea levels is a formula for disaster.  It's a candle burning from both ends.  Getting hammered by severe storm events of increasing frequency and intensity worsens the impacts of over-population.

The Philippines have already taught us much about now climate change impacts societies but the Philippines also have much left to teach us in coming years.