Chinese officials are now admitting the existence of "cancer villages" in areas where pollution and environmental degradation have resulted in cancer rates far above normal.

According to Chinese business magazine Caijing, Chinese officials with the Ministry of Environment Protection confirmed the existence of cancer villages in a statement announcing plans to alleviate pollution and its harmful side effects.

“The toxic chemicals have caused many environmental emergencies linking to water and air pollutions,” the Ministry announced. “There are even some serious cases of health and social problems like the emergence of cancer villages in individual regions.”

Mainland China’s cancer rates have been surging since the 1990’s, becoming the nation’s biggest cause of death. In 2010, an investigative journalist and environmental activist, Deng Fei, posted a widely circulated map of China’s cancer villages. Deng Fei was able to map out over 100 cancer villages, covering 27 provinces. Research by other academics and news organizations suggests that a more realistic estimate would be upwards of 400. 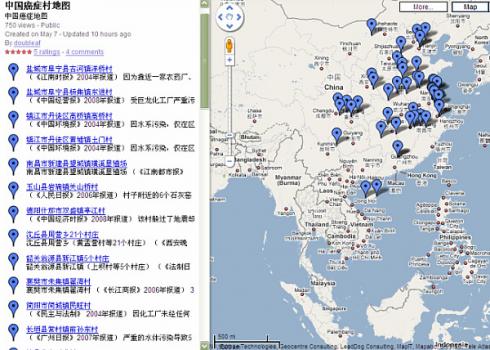 Some of these pics you might find gross and/or disturbing.
From 2006 - 2009, the first glimpse from behind the Bamboo Curtain by award winning photographer Lu Guang.

Utterly heartbreaking photographs. Yes, they are disturbing but we need to see them.

China is just at the beginning of its Industrial Revolution. How rapidly will this environmental epidemic grow, how far will it spread? For every cancer victim today, how many others have just not developed the disease yet?

No people can be exposed to this sort of contamination for very long and not suffer grievously. I think we're just seeing the tip of a very large iceberg.