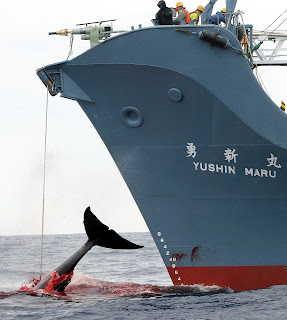 The ruling was issued on Wednesday by chief judge Alex Kozinski of the 9th US circuit court of appeals.

In his 18-page opinion, he wrote: "You don't need a peg leg or an eye patch. When you ram ships; hurl containers of acid; drag metal-reinforced ropes in the water to damage propellers and rudders; launch smoke bombs and flares with hooks; and point high-powered lasers at other ships, you are, without a doubt, a pirate, no matter how high-minded you believe your purpose to be."

Had this ruling come from a country whose justice system had a shred of integrity this ruling would be more worrisome but, it didn't, it was an American court.

Piracy, really?   What is piracy on the high seas after all but unsanctioned privateering?   That's certainly what was on everyone's mind when it was outlawed by the Peace of Westphalia in 1648.  It's commerce raiding, pillaging.   There's no element of that whatsoever in the Sea Shepherd campaign against Japanese south ocean whaling masquerading as scientific research.

If anyone is doing any pillaging, it's the Japanese.   They're privateers operating under the sanction of their government that hasn't read the memo that privateering itself has been outlawed since 1856 under the Declaration of Paris.

And the Japanese aren't alone.  Other nations, including Norway, also support whaling.   Many other countries simply turn a blind eye as their commercial fleets destroy one fishery and then move on to the next.

Why did the American court get involved in this?   Because it now provides a vehicle to hunt down the Sea Shepherd ships and leave Japanese whalers to their bloody business, unwatched, unchallenged and unmolested.

countries which spend as much time as they do to try and put paul watson in jail have something to hide. the american willingness to cooperate with japanese interests in this action is more about corporate cooperation than anything else. it also sends a message to protestors everywhere, we can get the americans to do our dirty work.