It's More Than a Little Missing Ice 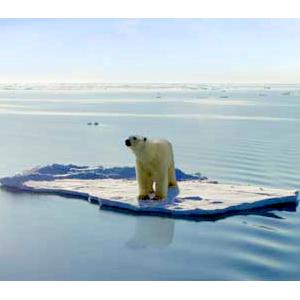 Killer heat waves, droughts and floods whipsawing the planet are the result of the warming Arctic region.  It's pretty simple - lose the ice, lose the planet.

Hey, how about a blast from the past?   Remember when, way back in 2007 the Intergovernmental Panel on Climate Change warned that “in some projections, Arctic late-summer sea ice disappears almost entirely by the latter part of the 21st century?   Oh weren't those the good old days.

Those whacky alarmists.   Why they were out by, oh, most of a century.  We now know that Arctic late-summer sea ice will be disappearing entirely within another four or five years.

Ice, schmice, who cares?  It's not like you're planning to go snowmobiling up there are you?   Well, you see, here's the thing.  Nature has this amazing ability to reach out and touch someone - you.

If memory serves, it was Britain's Hadley Meteorological Centre that announced a couple of years back that Rossby Waves were the culprit behind much of the extreme weather or "global weirding" that was suddenly besetting our planet.   Now Germany's Potstdam Institute for Climate Impact Research has released a paper corroborating the theory.

"The study of meandering air systems that encircle the planet adds to understanding of extremes that have killed thousands of people and driven up food prices in the past decade.

'So instead of bringing in cool air after having brought warm air in before, the heat just stays,' he said in a statement of the findings in the U.S. journal Proceedings of the National Academy of Sciences.

A difference in temperatures between the Arctic and areas to the south is usually the main driver of the wave flows, which typically stretch 2,500 and 4,000 km (1,550-2,500 miles) from crest to crest.

But a build-up of greenhouse gases in the atmosphere, blamed on human activities led by use of fossil fuels, is heating the Arctic faster than other regions and slowing the mechanism that drives the waves, the study suggested."

So what does all this mean to you?   Quite a bit, actually.   Back when we had the "end of the century" estimate it was quite reasonable to believe we in the temperate zone would be the "last and least" impacted by global warming.  That was an immediate problem for those little people away down in the tropics.  We, by contrast, had plenty of time to sort this out.   Last August, Guardian enviro-scribe, George Monbiot, said that myth was shattered.

The melting disperses another belief: that the temperate parts of the world – where most of the rich nations are located – will be hit last and least, while the poorer nations will be hit first and worst. New knowledge of the way in which the destruction of the Arctic sea ice affects northern Europe and North America suggests that this is no longer true. A paper published earlier this year in Geophysical Research Letters shows that Arctic warming is likely to be responsible for the extremes now hammering the once-temperate nations.

The north polar jet stream is an air current several hundred kilometres wide, travelling eastwards around the hemisphere. It functions as a barrier, separating the cold, wet weather to the north from the warmer, drier weather to the south. Many of the variations in our weather are caused by great travelling meanders – or Rossby waves – in the jet stream.

Arctic heating, the paper shows, both slows the Rossby waves and makes them steeper and wider. Instead of moving on rapidly, the weather gets stuck. Regions to the south of the stalled meander wait for weeks or months for rain; regions to the north (or underneath it) wait for weeks or months for a break from the rain. Instead of a benign succession of sunshine and showers, we get droughts or floods. During the winter a slow, steep meander can connect us directly to the polar weather, dragging severe ice and snow far to the south of its usual range. This mechanism goes a long way towards explaining the shift to sustained – and therefore extreme – weather patterns around the northern hemisphere.

And, if you like pictures, here's Ottawa U. prof Paul Beckwith:

So now we've got these giant atmospheric waves whipsawing the northern hemisphere, ushering in our new climate for generations to come.   Remember the severe drought that hit the United States and even southern Canada last summer?   MSN Money reports 2013 could be a repeat of last year.

It's hard to imagine, considering the recent winter storms that have caused floods, blizzards and other havoc across large parts of the Lower 48, that much of the country is still in the throes of an historic drought.

But a glance at the U.S. Drought Monitor reveals much of the nation's agricultural spine, from the Dakotas all the way down to south Texas, remains caught in the grip of what the Monitor classifies as severe, extreme or even exceptional drought conditions.

Consumers across the country, even in areas blessed with good precipitation and ample water supply, will likely find their grocery bills further affected as the drought grinds on. That's especially true when it comes to beef and other meat prices. Sparse rains have dried up grazing and hay production across wide swaths of the country, causing cattle ranchers in particular to venture far and wide for available forage and supplemental feed, which in turn affects their bottom line.

"I mean, ranchers in the core of the drought have had to look all the way to the Carolinas or to northern Montana and North Dakota to bring in feed, and for a long period of time," says Nolan Doesken, the Colorado State Climatologist who is based at Colorado State University.

Along with livestock, many major crops -- including corn, wheat and soy beans -- have also been hit hard. Corn prices soared to record highs last summer, as the drought damaged crops and rising demand from both livestock and ethanol producers couldn't be met.

U.S. officials are genuinely praying for spring rains, plenty of them.  It's beginning to appear that will be decided by someone named Rossby.