Those Damned Swedes and Their Affordable, High-Tech Airplanes 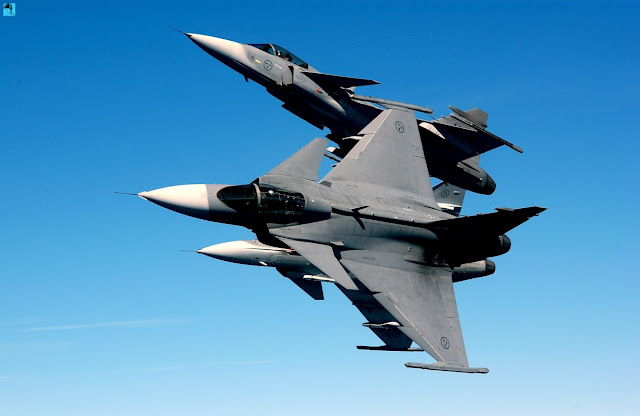 How is it that Sweden, with a population slightly smaller than Michigan's, can build its own fighter aircraft and the engines to power them?   And how do they do it under budget?

Aviation Week's Bill Sweetman finds it utterly perplexing.  He just can't understand how the Swedes have the nerve to build an airplane like the SAAB J39-Gripen.

The precursor to the J39-E, the Gripen Demo programme, has just been completed for 60% of its planned budget.   ...And if the J39-E program follows the established pattern, it will be executed under fixed-price contracts.

Clearly this must be stopped.  If this behavior was to become universal, it would result in soaring unemployment among executive vice-presidents.   Armageddocalypse.

Sadly the Swedes will fail to see reason since a nation with the population of Michigan can't produce a world-class fighter without cheating.

The history of Swedish fighter development is rooted in Cold War half-truths.  Neutral on paper, Sweden understood very well where the threat was and armed itself to the teeth.  In the 1960's Sweden had the world's fourth largest fighter force.

Sweden was developing multi-national programs, teaming with the U.S. and Britain on engines and avionics, while rivals were busting their budgets in pursuit of autarky.   From swept wings to real supersonic speed, and automated interception to pulse-Doppler radar, Sweden took third place behind the superpowers and led the world in networked operations.

Sweetman credits Sweden's unrivaled success to the FMV, a civilian agency than then King Augustus Adolphus set up in the wake of the loss of the battleship Vasa that sank upon launching in 1628.   FMV is something like a civilian interface between the military and defence contractors.   The military orders through FMV but doesn't control it.   Defence contractors have to sell to the FMV.  It's their customer and FMV has a well-honed eye for value and performance.

When it came to the J-39 Gripen, FMV not only set up the deal but drove the under-budget production.   The agency also focused on low lifetime operating costs, something other western nations have largely ignored.

The Gripen is the anti-F-35.  It's not a stealth fighter but, unlike the F-35, it is a fighter.   And, besides, the stealth advantage is fading fast.

Unfortunately the Gripen is a "small country," single-engine fighter not particularly well suited to Canada's vast empty north.   Then again it is probably better than the F-35 at that job.  That said, it shows what the Swedes can do on a limited budget that the Big Boys can't do without emptying Fort Knox.

It also shows how a country so much smaller than Canada, in both population and GDP, can create advanced technology our country could only dream of and do it on a budget.  It kind of shows us up as slothful, profligate and backward.  We could have done everything Sweden has achieved.  We just stopped reaching and now seek our wealth in harvesting what we did not sow. Oh, I wonder if the Swedes want bitumen?

It does make you wonder what Saab would come up with if we asked for a 2 engine long range variant?

The same thought has crossed my mind. The thing is, SAAB has a real track record of joint-venturing. They're currently working with Turkey on development of an indigenous Turkish stealth fighter. SAAB could offer a vehicle for rebuilding Canada's aviation industry with all the associated high-tech spin offs.

IF the twin engine issue is no longer a concern regarding the North, the rough field/austere operation capability of the Gripen means that you could sprinkle very rough FOBs all over the North. It only needs 500m of flat.

Google "saab kf-x" and you'll see a twin engine concept Saab designed for South Korea in mind. (ultimately SK has at least for now decided to opt for a indigenous and less advanced design)

MoS, then again the pilots would have to take a page from the tactical helicopter crowd...I'm unconvinced today's pilots are into sleeping rough and eating field rations.

@ Anon. There's a picture of the proposed Korean stealth fighter posted here a week or so back.

@ Boris. I'd like to think that's not true. Have we really gone that far?