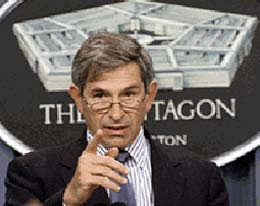 Career U.S. Army commander turned academic, Andrew J. Bacevich, has ties to Iraq.   He commanded an American unit in Operation Desert Storm to liberate Kuwait on the orders of George H.W. Bush.   Years later his son, a U.S. Army lieutenant, would die in Iraq in a war ordered by George w. Bush.

In the years between his Iraq war and his son's, Bacevich had retired from the U.S. Army and had gone from an unquestioning belief in his country and its military to become a fierce critic of what he came to see as a deeply flawed government and its military philosophy and institutions.   Bacevich tried to reason with his son, to talk him out of going to Iraq but, orders are orders, his son went and died there.

In his post-military, academic career, Andrew Bacevich worked for Paul Wolfowitz, the then dean of the Johns Hopkins School of Advanced International Studies.   On the 10th anniversary of America's conquest of Iraq, Bacevich wrote an open letter to Wolfie that was published in Harper's magazine.

Bacevich writes that Wolfowitz was never part of the neo-con rabble like Kristol or Cheney but rather an apostle of their guru, Albert Wholstetter.

"...I’ve come to appreciate the extent to which your thinking mirrors that of the nuclear strategist Albert Wohlstetter. Your friend Richard Perle put the matter succinctly: “Paul thinks the way Albert thinks.” Wohlstetter, the quintessential “defense intellectual,” had been your graduate-school mentor. You became, in effect, his agent, devoted to converting his principles into actual policy. This, in a sense, was your life’s work.

[Wohlstetter] was the smartest guy in the room before anyone had coined the phrase. Therein lay his appeal. To be admitted to discipleship was to become one of the elect.

First, liberal internationalism, with its optimistic expectation that the world will embrace a set of common norms to achieve peace, is an illusion...

Second, the system that replaces liberal internationalism must address the ever-present (and growing) danger posed by catastrophic surprise...

Third, the key to averting or at least minimizing surprise is to act preventively. If shrewdly conceived and skillfully executed, action holds some possibility of safety, whereas inaction reduces that possibility to near zero. Eliminate the threat before it materializes. In statecraft, that defines the standard of excellence.

Fourth, the ultimate in preventive action is dominion. The best insurance against unpleasant surprises is to achieve unquestioned supremacy.

Lastly, by transforming the very nature of war, information technology — an arena in which the United States has historically enjoyed a clear edge — brings outright supremacy within reach. Of all the products of Albert Wohlstetter’s fertile brain, this one impressed you most. The potential implications were dazzling. According to Mao, political power grows out of the barrel of a gun. Wohlstetter went further. Given the right sort of gun — preferably one that fires very fast and very accurately — so, too, does world order.

...your first effort to codify supremacy and preventive action as a basis for strategy had ended in embarrassing failure. I refer here to the famous (or infamous) Defense Planning Guidance of 1992, drafted in the aftermath of Operation Desert Storm by the Pentagon policy shop you then directed. Before this classified document was fully vetted by the White House, it was leaked to the New York Times, which made it front-page news. The draft DPG announced that it had become the “first objective” of U.S. policy “to prevent the re-emergence of a new rival.” With an eye toward “deterring potential competitors from even aspiring to a larger regional or global role,” the United States would maintain unquestioned military superiority and, if necessary, employ force unilaterally. As window dressing, allies might be nice, but the United States no longer considered them necessary.

In the ensuing hue and cry, President George H. W. Bush disavowed the document. Your reputation took a hit. But you were undeterred.

The election of George W. Bush as president permitted you to escape from academe. You’d done yeoman work tutoring candidate Bush in how the world works, and he repaid the debt by appointing you to serve as Donald Rumsfeld’s deputy atop the Pentagon hierarchy...

You immediately saw the events of 9/11 as a second and more promising opening to assert U.S. supremacy. When riding high a decade earlier, many Americans had thought it either unseemly or unnecessary to lord it over others. Now, with the populace angry and frightened, the idea was likely to prove an easier sell. Although none of the hijackers were Iraqi, within days of 9/11 you were promoting military action against Iraq. Critics have chalked this up to your supposed obsession with Saddam. The criticism is misplaced. The scale of your ambitions was vastly greater.

In an instant, you grasped that the attacks provided a fresh opportunity to implement Wohlstetter’s Precepts, and Iraq offered a made-to-order venue. “We cannot wait to act until the threat is imminent,” you said in 2002. Toppling Saddam Hussein would validate the alternative to waiting. In Iraq the United States would demonstrate the efficacy of preventive war.

So even conceding a hat tip to Albert Wohlstetter, the Bush Doctrine was largely your handiwork. The urgency of invading Iraq stemmed from the need to validate that doctrine before the window of opportunity closed. What made it necessary to act immediately was not Saddam’s purported WMD program. It was not his nearly nonexistent links to Al Qaeda. It was certainly not the way he abused his own people. No, what drove events was the imperative of claiming for the United States prerogatives allowed no other nation.

...the proximate aim was to unshackle American power. Saddam Hussein’s demise would serve as an object lesson for all: Here’s what we can do. Here’s what we will do.

...To Wohlstetter’s five precepts you had added a silent codicil. According to the unwritten sixth precept, Israeli interests and U.S. interests must align. You understood that making Israelis feel safer makes Israel less obstreperous, and that removing the sources of Israeli insecurity makes the harmonizing of U.S. and Israeli policies easier. Israel’s most effective friends are those who work quietly to keep the divergent tendencies in U.S.-Israeli relations from getting out of hand. You have always been such a friend. Preventive war to overthrow an evil dictator was going to elevate the United States to the status of Big Kahuna while also making Israelis feel just a little bit safer.

Imagine — you must have done so many times — if that notorious mission accomplished banner had accurately portrayed the situation on the ground in Iraq in May 2003. Imagine if U.S. forces had achieved a clean, decisive victory. Imagine that the famous (if staged) photo of Saddam’s statue in Baghdad’s Al Firdos Square being pulled down had actually presaged a rapid transition to a pro-American liberal democracy, just as your friend Ahmed Chalabi had promised. Imagine if none of the ensuing horrors and disappointments had occurred: the insurgency; Fallujah and Abu Ghraib; thousands of American lives lost and damaged; at least 125,000 Iraqis killed, and some 3 million others exiled or displaced; more than a trillion dollars squandered.


You expected something different, of course. Shortly before the war, you told Congress:


'It’s hard to conceive that it would take more forces to provide stability in post-Saddam Iraq than it would take to conduct the war itself and to secure the surrender of Saddam’s security forces and his army. Hard to imagine.'


Your imagination led you to foresee a brief conflict, with Iraqis rather than U.S. taxpayers footing the bill for any mess left behind.

After all, preventive war was supposed to solve problems.
Eliminating threats before they could materialize was going to enhance our standing, positioning us to call the shots. Instead, the result was a train wreck of epic proportions. Granted, as you yourself have said, “the world is better off” with Saddam Hussein having met his maker. But taken as a whole, the cost-benefit ratio is cause for weeping. As for global hegemony, we can kiss it goodbye.

One of the questions emerging from the Iraq debacle must be this one: Why did liberation at gunpoint yield results that differed so radically from what the war’s advocates had expected? Or, to sharpen the point, How did preventive war undertaken by ostensibly the strongest military in history produce a cataclysm?

Not one of your colleagues from the Bush Administration possesses the necessary combination of honesty, courage, and wit to answer these questions. If you don’t believe me, please sample the tediously self-exculpatory memoirs penned by (or on behalf of) Bush himself, Cheney, Rumsfeld, Rice, Tenet, Bremer, Feith, and a small squad of eminently forgettable generals.

What would Albert Wohlstetter have done? After Iraq, would he have been keen to give the Bush Doctrine another go, perhaps in Iran? Or would he have concluded that preventive war is both reckless and inherently immoral? That, of course, had been the traditional American view prior to 9/11.

Would Albert endorse Barack Obama’s variant of preventive war, the employing of unmanned aircraft as instruments of targeted assassination? Sending a Hellfire missile through some unsuspecting jihadist’s windshield certainly fits the definition of being proactive, but where does it lead? As a numbers guy, Albert might wonder how many “terrorists” we’re going to have to kill before the mission accomplished banner gets resurrected.

Given the state of things and our own standing ten years after the start of the Iraq war, what would Albert do? I never met the man (he died in 1997), but my guess is that he wouldn’t flinch from taking on these questions, even if the answers threatened to contradict his own long-held beliefs. Neither should you, Paul. To be sure, whatever you might choose to say, you’ll be vilified, as Robert McNamara was vilified when he broke his long silence and admitted that he’d been “wrong, terribly wrong” about Vietnam. But help us learn the lessons of Iraq so that we might extract from it something of value in return for all the sacrifices made there. Forgive me for saying so, but you owe it to your country.

Give it a shot.

A Tennyson moment. History repeats, as it often does.

For those less known, there's just the memories, and the simmering anger.