Yeah, Sure, the Jim Crow South is No More 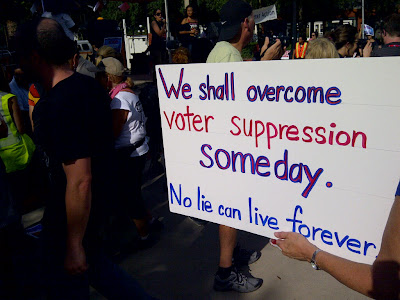 Any court that can pretend corporations are people has demonstrated a talent for overcoming reality.   That pretty much describes today's United States Supreme Court or at least the hard-right conservative majority that calls the shots.   Those five cloaked hooligans are now fixing to pretend that minority voting rights in the Slave States are no longer in need of a federal watchdog.   One of them, Scalia, even refers to safeguarding minority votes as "racial entitlement".   The only thing he left out was the "N" word.

In the last American federal elections there were ample displays of suppression of minority voting rights.   Here's one from The New Republic.

"...back in 2007 [Dr. Brenda Wilson and her husband of South Carolina] decided to   help townspeople register to vote. Brenda went to housing projects, the jail, anywhere she was likely to find disenfranchised people. She redoubled her efforts in the spring of 2011, when Governor Nikki Haley signed legislation requiring government-issued photo identification at the polls. Williams began to help people secure photo IDs, and when she realized how arduous and costly that was for many residents—especially those who lacked birth certificates, or had their names misspelled on them—she shared her observations in multiple letters to Attorney General Eric Holder. Her efforts were vindicated two days before Christmas, when the Department of Justice denied preclearance of the law, sending the matter to the federal courts.

South Carolina eventually agreed to soften its requirements, but that happened only because the U.S. government was able to challenge the law in the first place. And throughout her crusade, Williams saw plenty of signs that things have not changed as much in the Deep South as many—including Chief Justice John Roberts, who has sent signals suggesting he wants to do away with Section 5—would like you to believe.

Take, for instance, the e-mail Williams received April 19, 2011, from Phillip Lowe, a Republican state representative whom she had contacted about funding for her efforts to get IDs for resident—efforts that, she says, cost her and her husband "thousands."

Lowe e-mailed right back: "I have a way of funding your operation and solving all the name change problems. Ask all the people needing to change their name to come to a free legal seminar. Have [the South Carolina Law Enforcement Division] run a free background check. If any turn up in the most wanted list, you will get the reward. :)"

They're called the Slave States for a good reason.   Many of us only just discovered that de facto slavery remained alive and well in those states right up until WWII.   All it took was suitably corrupt legislatures, courts and police in service to suitably corrupt societies.

Racism is staging a pretty strong recovery in parts of the United States today, principally in Red State America.   Neo-racists don't need the help of the U.S. Supreme Court but it looks like they're going to get it.

Why don't the American stay at home and work on ensuring democracy is available at home. "nation building" is a funny concept when the U.S.A. denies its own citizens the rights the allege they are trying to ensure others have in foreign countries.

Right about now there all too many cases which would get the U.S.A. on a list for undemocratic countries. The Jim Crowe agenda is once again upon the U.S.A. with the assistance of some of the worst justices the country has ever seen. I don't know what can be done about it but I can see that many who worked on voter registration back in the 50s and 60s may have to go do it once again. Once it was done by the young. Now they may have to go to do it when they are old. It is not how many may want to spend their senior years, but it has to be done.

I too wonder about the decline in civility and public morality that seems so widespread through many societies. It's as though civilization itself is being thrown back, displaced. Some have suggested these regressions are symptomatic of looming economic and social chaos. I wish I could argue with that.