Is the GOP a Sinking Ship? 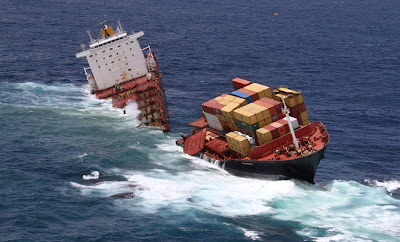 It's a truly forlorn sight, a ship, broken in two, going down by the bows and the stern.  But it may be an apt metaphor for today's Republican Party.  There's a growing school of thought in Washington that America's two party system may be on its way out, the victim of social change and a disillusioned electorate.

Inside the cozy enclaves of GOP bonhomie—hunkered at the tables of see-and-be-seen Washington restaurants—Republican leaders are sourly predicting a party-busting independent presidential bid by a tea-party challenger, like Sen. Rand Paul, R-Ky., in 2016.
To them, the GOP apocalypse looms larger than most realize.

Dueling State of the Union rebuttals and Karl Rove’s assault on right-wing candidates are mere symptoms of an existential crisis that is giving the sturdiest Republicans heartburn.
Posted by The Mound of Sound at 12:13 PM