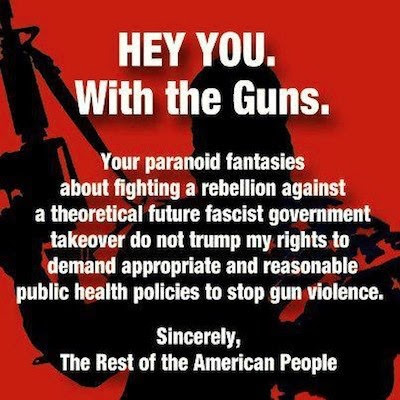 He challenged the National Rifle Association's arguments opposing Barack Obama's plans, declaring: ''They say, 'Well, it's about our culture … The facts are, our culture's not killing 25 people a day. It's weapons and high-capacity magazines. It's criminals who get guns without going through a background check.

''We have to speak for those 20 beautiful children who died 69 days ago, 12 miles from here,'' Mr Biden added, saying he had met two Sandy Hook parents before taking the stage.
''I can't imagine how we will be judged as a society if we do nothing,'' he said. ''If you're concerned about your political survival, you should be concerned about the survival of our children. And guess what? I believe the price to be paid politically should go to those who refuse to act … The American people are with us.''

But the White House will have to overcome gun nut Republicans, especially the Tea Party variety, like Texas Republican Louie Gohmert.

"They want the elimination of firearms in America,'' Mr Gohmert said. ''Some of them have the idea that the second amendment was there to allow hunting. Not true. You know, it is for our protection and the founders' quotes make that very clear, including against a government that could run amuck,'' he told Freedom 107 radio.

''We've got some people who think sharia law ought to be the law of the land, forget the constitution. But the guns are there, the second amendment is there, to make sure all of the rest of the amendments are followed,'' the Tea Party-backed member of the House of Representatives said.

''I had somebody last week in Washington from either Georgia or Alabama was saying, 'Look, this goes back to we have got to have at least 50 rounds in our magazines because on average that's about how many it takes to bring down a drone.''

God Bless America, they're going to need it.