China does not seem able to come to grips with the pollution that is inexorably poisoning the country.   While Beijing talks about green energy, including 5th generation reactor technology, it brings online a new coal-fired power plant almost daily.  The country imports truly massive quantities of coal from the Pacific Rim, especially from Australia, with Canada getting its share also.  And China is eager to receive regular shipments of Athabasca bitumen to process through its own refineries.

Just how bad is it?  Last year it was reported that some 40% of the country's productive farmland is too contaminated from airborne heavy metals to be safe enough for food production.   And when your river looks like this, you've got a serious problem. 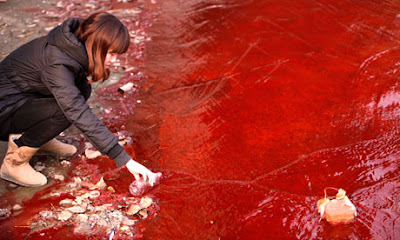 "Finally this issue [water pollution] has aroused the attention of the general public," said Ma Jun, head of the Beijing-based Institute of Public and Environmental Affairs. "Although it's going to take a long time [to fix], now we have seen a starting point."

...the government announced on Thursday that it will force heavily polluting industries to participate in a compulsory insurance programme to ensure they can adequately provide compensation for damage.

The mining and smelting industries must participate in the scheme, along with lead battery manufacturers, leather goods firms and chemical factories. Petrochemical companies and firms that make hazardous chemicals and hazardous waste would also be encouraged to participate.

China's water pollution woes are not a new story. The head of China's ministry of water resources said last year that up to 40% of the country's rivers are "seriously polluted", and an official report from last summer found that up to 200 million rural Chinese have no access to clean drinking water.

China's lakes are often affected by pollution-induced algae blooms, causing the surface of the water to turn a bright iridescent green. Yet even greater threats may lurk underground. A recent government study found that groundwater in 90% of China's cities is contaminated, most of it severely. Chinese media responded with surprising urgency – the Straits Times newspaper in southeastern Fujian province presented the findings in a full front-page spread.

"Groundwater is a key source of drinking water, industrial and agricultural use, especially in northern China," said Ma. "If this resource gets contaminated, it's far more difficult to restore than surface water or the air."