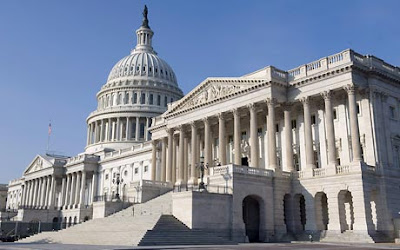 Brace yourself.   If you're hoping, praying for a progressive advance in America's Congress, The Atlantic has a sobering reality check for you.

The last time a major policy bill made it through the U.S. Senate was 951-days ago.   It was back on July 15, 2010 that the Senate passed the Dodd-Frank financial reform bill.

If you're wondering whether President Obama's ambitious second-term agenda has a chance to make it through Congress, this little fact might be worth keeping in mind. Pessimistic analyses of the prospects for the Obama agenda have mostly focused on the recalcitrant, GOP-led House of Representatives. But Obama's problem may actually be with the house of Congress his party controls. House Speaker John Boehner has signaled that he'll consider proposals that make it through the Democrat-controlled Senate. Based on recent history, that could be a tall order.
...Why is this the case? Republicans would say it's evidence of Obama's lack of juice with even members of his own party in Congress, a persistent and extremely well documented phenomenon over the course of the Obama presidency. They also say it's part of a larger pattern of Senate dysfunction that's been obscured by the noisier and even more spectacular dysfunction that plagues the House. As Republicans love to point out, the Senate also has not passed a budget since April 2009 -- it has passed alternative government-funding bills in the interim -- and the last Obama-proposed budget plan received exactly zero votes in symbolic votes in both the House and Senate.

Democrats disagree that this dynamic will kill Obama's second-term agenda. It's true, they acknowledge, that the Senate's bandwidth has been dominated by averting immediate disaster for the last couple of years. But the 2012 election changed everything, they say, and the appetite to tackle big issues has returned.
Posted by The Mound of Sound at 12:18 PM

Email ThisBlogThis!Share to TwitterShare to FacebookShare to Pinterest
Labels: US Congress