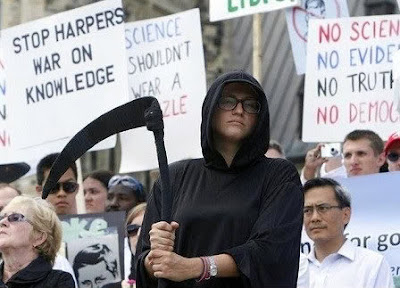 Scientific research is supposed to be peer reviewed.  For federal government scientists, however, their research is politically reviewed first to make sure it conforms to Comrade Harper's rancid ideology.

U Vic professor and climate scientist Andrew Weaver denounces Harper government policies cracking down on scientists at the Department of Fisheries and Oceans as "reminiscent of the Cold War era, with the KGB in Russia … George Orwell would just be chuckling in his grave.”

Under revised Fisheries and Oceans Canada rules, scientists working in its central and Arctic region cannot be involved in publishing research until a DFO division administrator has reviewed it “for any concerns/impacts to DFO policy.”

“The federal government wants to control what scientists do and what they find and how it’s reported. They want to suppress findings that can be seen as being against their political objectives,” Turk said.

A letter written to Harper Thursday on behalf of the 68,000 CAUT members expresses “deep dismay and anger at your government’s attack on the independence, integrity and academic freedom of scientific researchers.”

Demands from DFO that foreign researchers sign restrictive agreements have upset Andreas Muenchow, a University of Delaware oceanographer who has collaborated with Canadian scientists on Arctic research.

In a blog posting Muenchow wrote: “I believe this is a disturbing political climate change … I feel that it threatens my academic freedom and potentially muzzles my ability to publish data.”

The policy is substantially different from the 2003 Canadian government agreement, he wrote.

“They are moving toward a managed democracy where people get to vote every few years and the winning party rules, not governs. When you see yourself as a ruler, you can ignore science and data,” he said.

“There’s a shackling of science when it doesn’t give convenient answers and doesn’t serve the political interest.”

Stephen Harper is a warped bastard, a first-class son of a bitch, but so is everybody who supports him and empowers him to do this to Canada and our people.

Harper is no Conservative. He was Policy Chief for his, Northern Foundation Party of 1989. That is likely where Harper's, abusive dictatorship stems from.

Harper's behavior is so bizarre, some are questioning his sanity. Most Canadians say. Harper cheated to win the election, with his robo-call fraud. Harper's robo-call cheat, has spread to the Saskatchewan Tory's.

There is a petition, calling for Harper to resign. change4thebetter Canada, has put this petition out there.