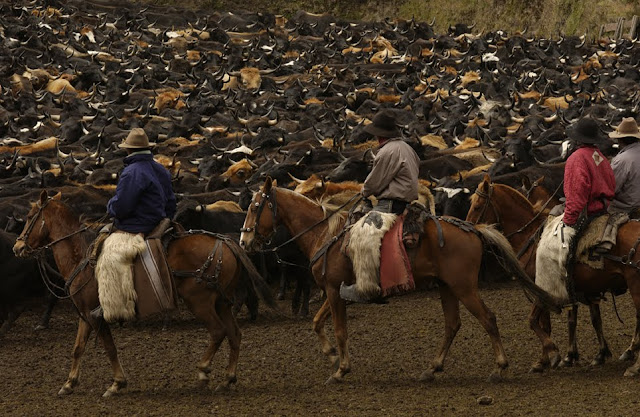 A United Nations Environment Programme report urges people in wealthy countries to become "demitarians" by cutting their meat consumption by half.   The reduction is said to be necessary to curb environmental destruction caused by excessive demand for meat products.

The quest for ever cheaper meat in the past few decades – most people even in rich countries ate significantly less meat one and two generations ago – has resulted in a massive expansion of intensively farmed livestock. This has diverted vast quantities of grain from human to animal consumption, requiring intensive use of fertilisers, pesticides and herbicides and, according to the UNEP report, "caused a web of water and air pollution that is damaging human health". The run-off from these chemicals is creating dead zones in the seas, causing toxic algal blooms and killing fish, while some are threatening bees, amphibians and sensitive ecosystems. "The attention this meat scare has drawn [highlights] poor quality meat. It shows society must think about livestock and food choices much more, for the environment and health," said [professor Mark] Sutton.

Chicken and pork are likely to be the meats that cause less environmental damage in relative terms, though standards of welfare and the circumstances in which livestock are raised can make a big difference. "Chicken is one of the most efficient [meats] as it grows very quickly and you can collect the manure," said Sutton. Meat production accounts for 80% of the nitrogen and phosphorus used in farming, according to the UNEP report, entitled Our Nutrient World: The challenge to produce more food and energy with less pollution. These nutrients are produced at great expense globally, but most of them end up wasted through the animals' manure. In some areas of the world, the nutrients are in short supply, resulting in lower crop yields.
Posted by The Mound of Sound at 7:53 AM