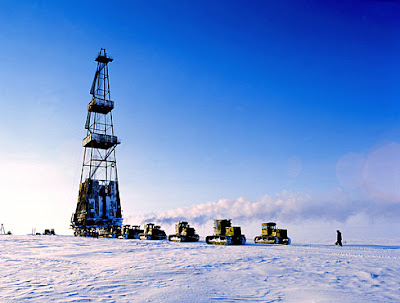 The United Nations Environment Programme warns that the Arctic is about to get gang raped and it's going to be ugly.

The Arctic  needs to be better protected from a rush for natural resources as melting ice makes mineral and energy exploration easier, the United Nations' Environment Programme (UNEP) said.

"What we are seeing is that the melting of ice is prompting a rush for exactly the fossil fuel resources that fuelled the melt in the first place," said Achim Steiner, U.N. Under-Secretary-General and UNEP Executive Director.

"As the UNEP Year Book 2013 points out, the rush to exploit these vast untapped reserves have consequences that must be carefully thought through by countries everywhere, given the global impacts and issues at stake."

The U.S. Geological Survey estimates that 30 percent of the world's undiscovered natural gas and 15 percent of oil is in the Arctic. Several companies, including Russia's Rosneft, Norway's Statoil and U.S.-based Exxon Mobil are getting ready to drill in areas of melting sea ice, despite the risks, technological difficulties and costs.

Some countries have estimated that the Northern Sea Route would be turned into a shipping highway, with a 40-fold increase in shipping by 2020.

There is also likely to be a boom in fisheries. A widely predicted northward shift in sub-arctic fish species, including Atlantic and Pacific cod, is now being detected. It is estimated that fish catches in the high latitudes, including the Arctic, could increase by 30 to 70 percent by 2055.

The Arctic has a snowball's chance in Hell of escaping destruction.  People like Harper won't be denied their dream of exploiting the Arctic seabed.   To them it's a cornucopia of found money, utterly irresistible.
Posted by The Mound of Sound at 9:28 AM

Harper is planning for Communist China, in the rich resources of our High Arctic. No country will challenge Red China.

Since when does China respect any other country's? Ghana detained Chinese miners, they were caught mining illegally. China does not respect other country's mining claims. South African people, were cheated out of their wages by China. Murray River went to court, to have Chinese miners removed.

Much of China's farmland and drinking water, is polluted with heavy metals and cancer causing agents.

Anyone thinking the High Arctic must be protected? Who can protect the High Arctic from, Communist China or Russia? Harper has given Canada away. We have no say, over anything. Just you try and block China? You will be looking at a lawsuit. Harper let that country into Canada. We are as good as gone.