On 13 April, 1919, a crowd assembled in Amritsar's public garden in defiance of British general Reginald Dyer's ban on all meetings.  It's believed that upwards of 10,000 Indian men, women and children gathered in the park.

Dyer called our his troops, ordered them to open fire on the crowd, and the fusillade lasted a full ten minutes until Dyer's soldiers were nearly out of ammunition.   While Dyer didn't hang around for a body count, British estimates set the dead at 379 with 1,100 wounded.   Indian estimates put the dead at over 1,000.

British Conservative prime minister, David Cameron, is in India trying to flog jet fighters, helicopters and other armaments (sorry, Dave, India already bought the French Rafale).   In a suck-up gesture, Cameron attended the Amritsar massacre memorial where he laid a wreath, wrote in the book of condolences and then stopped short of an official British government apology for the atrocity.

Cameron's justification for no state apology?

"In my view, we are dealing with something here that happened a good 40 years before I was even born, and which Winston Churchill described as 'monstrous' at the time and the British government rightly condemned at the time. So I don't think the right thing is to reach back into history and to seek out things you can apologise for."

Seek out things you can apologize for, Dave?   Really?   You've already sought out the Amritsar massacre memorial.   You've laid a wreath there and put an entry into the book of condolences.   Would it really be that big a deal a reach to say, on behalf of the British government, "sorry"?

But of course it would be a big deal for a small, island country that forged the greatest empire the world has ever known spanning the globe because that's a job best accomplished with cold steel and a hard will.   Apologize for Amritsar and you'll be busy apologizing for a good many other nasty things for a remarkably long time.

Why, for example, the British government might have to apologize to Iraqi Kurds for firing artillery shells full of mustard gas into their villages in 1920 when they wouldn't pay their taxes. (Winston Churchill was foreign minister at the time and, yes, Winnie directed the first use of WMDs on Iraqi civilians, not Saddam.).   The list goes on.

Oh yeah, India?  You're not getting the Koh-i-Noor diamond either.  Her Majesty kind of likes it right where it is. 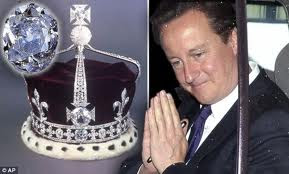 “There is one thing you can say for the Holocaust deniers: at least they know what they are denying. In order to sustain the lies they tell, they must engage in strenuous falsification. To dismiss Britain's colonial atrocities, no such effort is required. Most people appear to be unaware that anything needs to be denied.” Guardian Apr 23, 2012

As far as British atrocities in colonies are concerned it tops the list. Maybe America will catch up someday.