Just How Small Are You, Really? 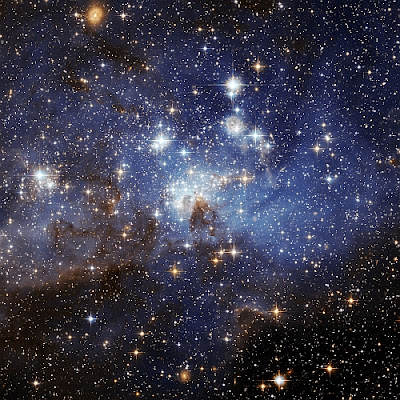 On a clear, moonless summer night I like to sit out in the backyard and gaze up into the heavens.  I realize that the lights I am seeing come from a time so far past that it's beyond our ability to really make sense of it.   And I know that light also comes from a time of civilizations past and long gone.

Just figuring out our miniscule place in the universe is tough enough but now it seems our universe may not be as universal as we might like to think.   That Higgs Boson particle, remember that? Well that breakthrough has led to a theory of "vacuum instability" which suggests in a few billion years a brand new universe will open up in ours and replace it.

Since detecting the particle in their accelerator experiments, researchers at the Geneva lab and at related institutions around the world have begun to theorise on the Higgs' implications for physics.

One idea that it throws up is the possibility of a cyclical universe, in which every so often all of space is renewed.

"It turns out there's a calculation you can do in our Standard Model of particle physics, once you know the mass of the Higgs boson," explained Dr Joseph Lykken.

"What happens is you get just a quantum fluctuation that makes a tiny bubble of the vacuum the Universe really wants to be in. And because it's a lower-energy state, this bubble will then expand, basically at the speed of light, and sweep everything before it," the Fermi National Accelerator Laboratory theoretician told BBC News.

It was not something we need worry about, he said. The Sun and the Earth will be long gone by this time.
Posted by The Mound of Sound at 8:28 AM

This planet is in enough trouble already. Pollution is China is so horrendous, black smog turns day into night. The pollution index is off the charts. Chinese people have to wear face masks and respirators. They are told to stay indoors. Much of China's farmland and drinking water is contaminated with, heavy metals and cancer causing agents. Chinese farmers, have had to leave their farms. Other country's are really complaining of China's black pollution, drifting into their country's and ruining their food crops.

Tar sands pollution has now contaminated Alberta's lakes. Some farmers, have had to remove their stock. Alberta rivers are contaminated, from pipeline bursts too.

The tar sands devastation in the High North, is permanent.

There is now acid in the Ocean, right up to the shores of BC.

Climate change disasters, are now in too many country's, for Harper and Obama to ignore. There is a lot of anger directed at them. Putting their greed before the planet and the lives on this planet, is becoming charged into a blow-up.

Mind you. It is Harper's greed, that is the most revolting of all.

Man is the most destructive animal on earth and, the most stupid one at that.