Think Climate Change Denialism Has Run Out of Steam - or Bucks? Think Again

The Guardian has discovered a secret funding vehicle used by Conservative billionaires like the Koch boys to funnel approximately $120-billion to climate change denialists over the past decade.  It looks like this: 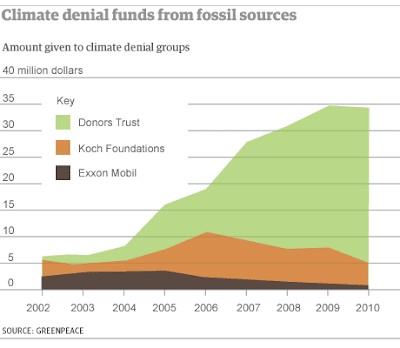 We have to revisit our notions of respectability and wealth because the wealthiest among us can use their power to do very shitty things.
Posted by The Mound of Sound at 7:50 AM

http://www.ucsusa.org/ssi/climate-change/scientific-consensus-on.html Right under their name "Citizens and Scientists for Environmental Solutions" http://scienceandpublicpolicy.org/reprint/consensus_on_climate_change.html
Debate over whether human activity causes Earth climate change obscures the immensity of the dynamic systems that create and maintain climate on the planet. Anthropocentric debate leads people to believe that they can alter these planetary dynamic systems to prevent what they perceive as negative climate impacts on human civilization.
http://www.skepticalscience.com/global-warming-scientific-consensus.htm
.the debate on the authenticity of global warming and the role played by human activity is largely nonexistent among those who understand the nuances and scientific basis of long-term climate processes”. (Doran 2009). In other words, more than ***95% of scientists working in the disciplines contributing to studies of our climate****, accept that climate change is almost certainly being caused by human activities ( In other words - those who have professional activities in studies which are funded ) Yet in Comments
roverdc at 17:32 PM on 27 September, 2007
Concensus only has meaning if there is no pressure to conform in either direction. In the climate debate this is extremely far from being true. How far could we reasonably expect a questioner to go in an IPCC panel when that instantly collects a denialist label and probably guarantees a dead end to even the most able career? In the current climate it is reasonable to assume the dissent camp is at least ten times the admitted size. I know that as an admittedly uninformed questioner I get some pretty vitriolic responses from the eco faithful.
Wondering Aloud at 06:54 AM on 10 November, 2007
Roverdc hits the nail on the head. To say there is bias in the science at this point is a wild understatement. What the public hears is claims that "all scientists except a few kooks agree that catastrophic global warming is immenent and caused by your car.". This is what they think you mean by consensus.
Consensus is not science but if it was the supposed 2500 scientists of the IPCC report have every failing you mention of the petition project and more important the people who signed the petition agreed with what it said. The same can not be said for the IPCC and its supposed 2500. Counted in that IPCC number are hundreds of non scientists, NGO reps (these are people with an agenda)and most importantly reviewers, many of whom don't even agree with the conclusions of the IPCC report. In fact most of the famous "deniers" are included in the 2500 IPCC counts.

Someone made the mistake of asking them after the second IPCC report (surveyed participants) and found that over 60% did not agree with the summary for policy makers.

Maybe we should stop pretending numbers and NGOs are scientists and that consensus is science. It's that claim that raises huge red flags for me.
.....Pretty much. Appeal to Authority is not scientific proof such as one would expect when discussing anything that conformed to scientific method and its need for contrasting ideas, but is rather a political debater's trick. Predicting the future, in fact, as a scientific exercise usually results in ribald hilarity and guffaws at credulity.

Political debater's tricks? Do you expect anyone to take you seriously with that sort of nonsense? I'm sorry, Opit, but I can't take your position as credible. You're drifting into the tinfoil hat brigade territory.

Guess tinfoil hat brigade includes debaters, then. http://yourlogicalfallacyis.com/
And someone who puts their trust in a culturally appropriate crystal ball is no one to talk about tinfoil hats.

Opit, I have to choose between science and people like you who have no scientific credentials whatsoever. It's sort of like the struggle to decide who should do your surgery, a surgeon or your mailman. I think it would be "culturally appropriate" to go with the surgeon.

ExxonMobile....owned by Tim Mellon...people need to know who owns this company.. and just how stupid he is...He may have graduated from Yale but that doesnt make him smart or very intelligent.

Past Lead Author selections have been criticized by other Lead Authors as
being overly dominated by political considerations.
Coupled with the deficiencies in the peer review process, this opens up the
possibility that the IPCC Bureau can pre-

Now then. Do you trust people who follow news and politics to uncover irregularities in the system ?

Note : I have been following the topic for years after initially being struck by both the reversing of climate predictions and the use of the 'Denier' meme which makes public contesting of views so necessary to the operation of Scientific Method possible.

What 'science' are you following in such case ? This is a political football causing international taxation on the use of energy to flow to the UN - the parent of the IPCC. Copenhagen failed in part because small and underdeveloped nations realized that they were getting the shaft.

BTW Would that be brain surgery you want done? http://www.thenewamerican.com/economy/commentary/item/3944-taking-delight-in-deception-greenspans-purposeful-obfuscation
The article reminds me of an apocryphal Russian quip : At Least we KNOW our government lies to us.
Better yet, visit Leading to War - a compilation of organized deception worthy of Madison Avenue.