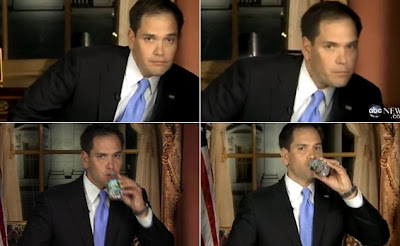 Maybe they should have stuck with Bobby Jindal.  Up and coming Republican Marco Rubio of Florida was picked to give the GOP rebuttal to president Obama's State of the Union speech this week.

Rubio showed how quickly he was able to shed his lizard skin for the sake of a shot at the rightwing leadership slot.

"Global warming, dependence on foreign sources of fuel, and capitalism have come together to create opportunities for us that were unimaginable just a few short years ago. Today, Florida has the opportunity to pursue bold energy policies not just because they are good for the environment but because people can make money doing it. The demand towards such advances will create an industry to meet it. Florida should be the Silicon Valley of that industry."

"First of all, the climate is always changing. That's not the fundamental question, the fundamental question is whether man-made activity is what's contributing most to it. I understand that people say there is a significant scientific consensus on that issue, but I've actually seen reasonable debate on that principle. The secondary question is, is there anything government can do about that, that will actually make a difference? The United States is a country; it's not a planet."

Better hit that water bottle again, Marco.  I think you just did a Jindal in your pants.
Posted by The Mound of Sound at 8:41 AM

He acknowledged ‘Global Warming’. He got thirsty.