The Butcher's Price of the War on Drugs 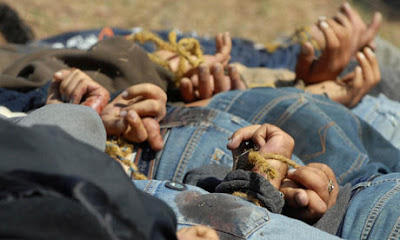 Mexico's drug wars have been brutal.   Upwards of 70,000 have been killed, often brutally, usually near the U.S. border.

Now it's emerging that another 27,000 have simply disappeared.

Combined with the 70,000 dead acknowledged recently by the new administration of President Enrique Pena Nieto, who succeeded Calderon on Dec. 1, the number of the disappeared makes the Calderon tenure the bloodiest period in Mexican history since the Mexican Revolution of the early 20th century.

On Thursday, human rights campaigners said the numbers place Mexico far above some of the better-known Latin American human catastrophes of decades past, including the rule of military regimes in Argentina, Chile and Brazil and civil wars in Nicaragua and El Salvador.

Lia Limon, Mexico’s deputy interior secretary for human rights and legal affairs, acknowledged on Wednesday that the government had compiled a list of 27,000 missing people after meeting with representatives of the New York-based advocacy group Human Rights Watch.

Mexican Interior Secretary Miguel Angel Osorio Chong on Thursday promised to “look for all of them.” But he also warned there were no guarantees. “We start from a fundamental fact,” he said, “little information, little evidence and no rules.”

We're not winning this war on drugs.  We're losing, badly, and tens of thousands of people are paying for it with their lives.   Hundreds of thousands more

Maybe that's the War the US Dept. of Homeland Security has been buying all the bullets for?

While perusing my favorite conspirators site this a.m.(Bloomberg), looking for an update on things such as oil and gold prices, an article on DHS purchasing millions of rounds of ammo, mostly 40 cal and 9mm hollow points caught my eye.

I went to that article and could find no original source material verifying the claim of 1.6 billion rounds of pistol ammunition. I followed the links and came up with one referenced order for three calibres of "commercial grade, lead training ammo" each for 100,000 rounds. Training ammo, stuff you take to the range.

The article you cite contends the Obama administration has purchased enough pistol rounds to shoot every American five times over.

Now, do you think that's real? Do you think the Republicans wouldn't have brought that up in the House and used it to beat Obama over the head like a Newfie on a Harp seal? Doesn't your lip get messed up from taking that hook all the time?

There appears to be a number of different bids for a variety of types of ammunition. Didn't follow all the links by any means but here's one example;

Clicking the first link under Amendment 1 produces a download which contains this;

Here are the links that led to the above.

One thing that seems significant here is many bids provide a minimum and a maximum amount that may be ordered, so the numbers used in the articles may represent maximums. Still, when they reference numbers like 40 million in one contract, that's a lot of lead and a lot of leeway.

As to offering any worthwhile opinions on what the US government or the Republicans may or may not do, that's beyond the my scope. Both do seem really keen on anything to do with the DHS though. One of the articles does state they have 65 to 75,000 employees.

Something else US gov. related you might find interesting is this take on the F35 program.