He's Coming Unglued. This Guy Is Not Fit to Govern Anything. 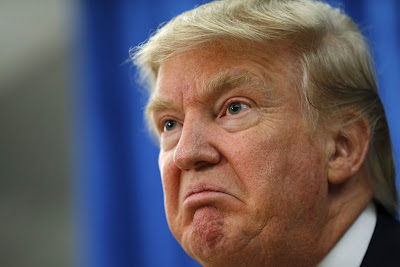 Donald Trump is threatening a major trade war with Europe, with China, and possibly Canada to boot. Trade wars are pretty serious stuff. They can damage relations among nations, increase existing tensions, escalate out of control.

Which is why an out of control president needs a straight jacket and a powerful IV sedative.

NBC News has a disturbing report of what drove the Mango Mussolini to proclaim a global trade food fight. Hint: it wasn't trade. It was everything else that was crawling under Trump's skin.

Trump's policy maneuver, which may ultimately harm U.S. companies and American consumers, was announced without any internal review by government lawyers or his own staff, according to a review of an internal White House document.

According to two officials, Trump's decision to launch a potential trade war was born out of anger at other simmering issues and the result of a broken internal process that has failed to deliver him consensus views that represent the best advice of his team.

On Wednesday evening, the president became "unglued," in the words of one official familiar with the president's state of mind.

A trifecta of events had set him off in a way that two officials said they had not seen before: Hope Hicks' testimony to lawmakers investigating Russia's interference in the 2016 election, conduct by his embattled attorney general and the treatment of his son-in-law by his chief of staff.

Trump, the two officials said, was angry and gunning for a fight, and he chose a trade war, spurred on by Commerce Secretary Wilbur Ross and Peter Navarro, the White House director for trade.

Trump exhibits the judgment and maturity of an unruly child. He cannot control his emotions and will lash out with scant regard for consequences. This is the very personality you do not want having access to the nuclear launch codes.

Having seen this before I still think it's dementia.

Now why would a Commerce Secretary advise a trade war that may significantly hurt US interests? Sorry, I forgot it was Wilbur Ross, banker to Russia's oligarchs. Nevermind...

During the recent Bombardier/Boeing tariffs fight, The US international trade commission over-ruled the Wilbur Ross Commerce Department's decision to impose duties. Unless Trump cleans out the USITC it will hopefully serve as an impediment to a Trump Trade War.


In my view, Chris, how this may play out in the days ahead is eclipsed by how Trump took this decision and the overall state of his mind. Nixon sought to play a borderline lunatic in hope of extracting concessions from the then North Vietnamese. I don't think Trump is pretending.

One almost thinks, with Trump's instability, that maybe Mueller should stop his investigation. (Just kidding, but barely.) Can you imagine what might happen if Donald Jr. were charged?

Anonymous Toby said...
Having seen this before I still think it's dementia.

I have to agree.
My neighbour who is an intelligent man( unlike Trump) suffers the same complaint.
A common theme of those with this horrid disease is that they deflect questions rather than confront them.


Toby, Trailblazer, I'll defer to your judgment on the dementia idea. Is anger a common sign of early onset dementia? I have wondered why Trump's reasoning seems so shallow. He often seems oblivious to the gaps in his logic as though the world is whatever he imagines it to be.

And how might your theory square with that test he took and supposedly aced?


I share your concerns, Lorne. Mueller's team is clearly investigating Trump and his family but, so far, no one has been charged, no indictments at least none that have been disclosed. Then again Mueller did save John Gotti for last when he went after the Gambino crime family.

I don't know about that dementia theory. Trump was given a clean bill of mental health in January, scoring 30 out of 30 on the Montreal Cognitive Assessment.

I think this is Trump being Trump. He has always been described as mercurial and prone to rash decisions - that's how he went bankrupt so many times. Trump has always been the man that assholes point to and say, "now that's an asshole!" There's no need to medicalize this.

Toby, Trailblazer, I'll defer to your judgment on the dementia idea. Is anger a common sign of early onset dementia?

From my experience of an unfortunate friend I would say yes, and so does his wife.
It could, perhaps, be more frustration than anger but the end result is quite similar.

I agree with Trailblazer; dementia victims often go through a period of anger due to their frustration at their diminishing abilities. Each dementia victim is unique. Many are very good at faking normalcy. Even doctors and nurses can be fooled. Family members can have denial problems.

For those who believe Trump's "clean bill of mental health" I have a bridge to sell.