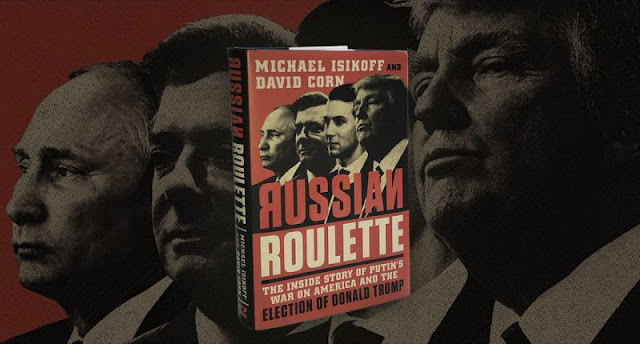 When I buy books, I tend to buy used - on the cheap. At the moment I'm working my way through an autobiography of Frederick Douglas, the memoirs of Ulysses S. Grant, Darwin's "The Origin of Species" and a third century text, a field manual on the proper recruiting, training, equipping and deployment of a Roman legion. A bit obscure, perhaps, but easily had for just a few bucks a volume on the used market.

Breaking with my parsimonious pattern I dipped into my lunch money to buy a copy of Michael Isikoff and David Corn's new book, Russian Roulette, The Inside Story of Putin's War on America and the Election of Donald Trump.

I've only made it through the first two chapters but, overall, I find the book pretty helpful. By now we've been inundated with leaks and news reports about Donald Trump, Vlad Putin, Obama and Clinton and all the bit players. Isikoff and Corn are rehashing a lot of stuff we've already read but they're presenting it collated, organized chronologically. The authors don't connect the dots so much as they present them in a manner in which the reader, with perhaps a better understanding of their meaning, can then connect for him/herself. What might have been a collection of anecdotal curiosities turns into a coherent narrative. Patterns emerge with somewhat greater clarity.

And then there's information such as the following excerpt that puts Russia's hacking effort into perspective:

"In February 2013, Gen. Valery Gerasimov, the chief of staff of Russia's armed forces, published an article in an obscure Russian military journal advocating that Russia adapt its military strategies to the modern world. The piece initially received little attention within the U.S. national security establishment. But after Radio Liberty published a translation, US officials took notice. Here was a Russian military leader proposing a new doctrine that could shape how Russia would engage - and do battle - with the United States.

"In the article, Gerasimov explored how social media had fueled the Arab Spring. He noted in the internet-dominated world there were new means for waging war: 'political, economic, informational.'  And these measures could involve 'the protest potential of the population.' In other words, information warfare could be used to weaponize political divisions within another nation. Gerasimov was crafting a doctrine of 'hybrid warfare' - a new form of conflict in which 'frontal engagements' by army battalions and fighter aircraft would become ;a thing of the past,' replaced by hackers and skilled propagandists trained to exploit existing rifts within the ranks of the adversary.

"'The very 'rules of war' have changed,' Gerasimov wrote. 'The role of nonmilitary means of achieving political and strategic goals has grown, and, in many cases, they have exceeded the force of weapons in their effectiveness... Long-distance, contactless actions against the enemy are becoming the main means of achieving combat and operational goals.' Gerasimov did not spell out what 'contactless actions' would replace ground troops. But it was not hard to figure out what he was talking about.

"The Russian intelligence services had become increasingly aggressive and sophisticated in their cyber hacks, penetrating government, business, and media networks all over the world. Russian hackers showed their might in 2007 when they blitzed Estonia. After the Estonian government removed a statue of a Soviet soldier, a massive cyberattack shut down the country's banking system, the sanitation system, and the websites of government agencies and news organizations. The country was paralyzed for days. And in 2008, Russian cyber warriors broke into the computers of the US Central Command - which oversaw US military actions throughout the Middle East - with an ingenious trick. Their operatives seeded bazaars in Kabul, where US soldiers shopped, with thumb drives for sale that were embedded with malware. All it took was one soldier with one infected thumb drive, plugged into a laptop hooked up to the US Central Command network, for the Russians to secretly obtain US military battle plans.

"Russia's cyberattacks were only one page in the Gerasimov playbook. Another was a revival of the old Soviet tactic of dirty tricks. And the Kremlin would soon deploy one against a high-level target: a senior US diplomat."

Interesting stuff and I'm pretty safe in saying it's worth a read.

What is wrong with us ? Russian leaders are smarter and more focused than our society is. While our pundits obsess with colourful socks, Russians figure out how to disable our systems.

We are being stupid; fighting silly little idealogical battles while whistling past the graveyard of Russian expertise. We are all to blame: politicians concentrating on getting reelected; bloggers wanting to be heard; commenters ( like me ) who want to see someone respond to their drivel; newspaper pundits desperate to survive the next cuts and the public ready to have their prejudices validates without critical examination. Until we quit our lazy, biased path of least resistance, our society will decline.


America and Russia each view the other as their strategic enemy. No one uses the word 'rival' or even 'adversary.' It's now down to 'enemy.'

Many have opined that American society is more divided today than it has been since the Civil War. The US has enemies, foreign and domestic, that are exploiting those divisions. American democracy, what remains of it, is getting pummeled from all sides.

We still don't know what hooks Moscow has in Trump but there's something obviously not kosher going on.

With NATO forces on Russia's doorstep, Putin uses cyberwar techniques to sow chaos across the US. It works. He knows it. Meanwhile Trump surrounds himself with hardline sycophants. Wait until John Bolton is brought on board.

None of the social media propaganda would be even remotely effective were it not for the overall lack of education and critical thinking skills of the American people. The Russians are simply exploiting one of their perceived enemy's weaknesses.

Hey, Lorne. I read parts of an interview with the CEO of Cambridge Analytica who boasts that his firm has a psychological profile of every adult in America, all 220 million.

Americans are under attack from without and from within and their government isn't doing a damned thing to defend them.

The Conservatives of the West are in the pocket of the Russians.
Greed knows no borders..

Perhaps it is Capitalism itself that is on trial here?

Analytica isn't a 'Murkin Company, the Guardian has been running a good series, starting with the hack of Brexit.

Analytica Is a "merc", willing to work for anybody, against anybody, for money.

Cambridge Analytica isn't an American company, Jay, but it was floated by Robert Mercer when he was teamed up with Steve Bannon. And it was a young Canadian from Victoria, Chris Wylie, who engineered the software that weaponized data mining. We know that Victoria's AggregateIQ went directly to the Brexit "Leave" campaign and pocketed a few million pounds for their contribution and we know from Cambridge personnel that AggregateIQ was the source of their software.

I've been trying to track down the elusive Chris Wylie for almost two years but he was laying low. Now he's come to the surface in another Guardian expose, complete with YouTube video interview.

The article indicates he had been a Parliamentary page and worked for a while in the offices of the Liberal opposition leader. At first I wondered if that was a sloppy reference to the Victoria legislature but the BC Libs were government, not opposition, when Wylie was involved so it must be Ottawa.

@ Xerxes, sorry I deleted your comment in error. I fetched it from my email account. You wrote:

"There seems a rather large curtain needing to be pulled back."

You're quite right. This cyber business is transforming politics and, especially, international relations into a new dynamic, barely recognizable from the past.

Here's an example. In the 5th or 6th chapter the authors relate a previously undisclosed hacking attack on the White House computer system. As usual, it was the Russians. Only this time it was different. In previous attacks the hackers were quick to make their escape once the attack was detected. This time they remained, morphing into something else, again and again. They were in the White House system and they weren't leaving. The White House security types finally had to "burn" the entire system because they realized they could never again be sure that the hackers hadn't left something undetectable that could pop up again. The computers were all taken out and destroyed. Millions of dollars of new equipment had to be brought in. Imagine how disruptive it would be if your hard drive crashed. That, in essence, is the chaos that Obama's staff had to endure.

Yup, but as the Lukoil "presentation" show's, they arn't even a "Western" Corporation. As long as they get paid, they will use their data, for anybody, against anybody, and their Parent Corp, is neck deep in the US and British MIC.

After Obama's "knock it off" call to Putin, the NSA started looking at "hitting back",

Then the "Shadowbrokers" put up for auction on the Dark Web, a whole host of NSA hacking tools and "First Day Exploits" that had gone unreported, that had been stolen from the NSA.

"Shadowbrokers" are generally believed to be a FSO Hacker group, ( sucessor to the KGB), and the NSA tools and First Day Exploits all target Western commercial software and sites.

Obama went to Yurtle the Turtle for bipartizan support for a push back. Yurtle chose to side with Putin.

That's when the "knock it off" order came down to the NSA to not retaliate.

Recently we've learn that the Russians are crawling all through our power grids, and of course, WannaCryI, WannaCryII and the Ransomware attacks all used the stolen NSA tools.