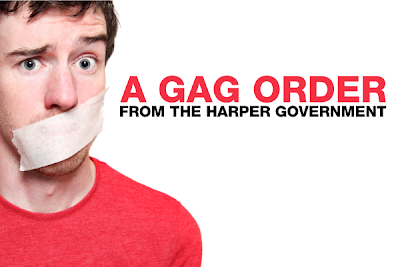 Could the courts force Sideshow Steve Harper to take his gags off federal government scientists?   Democracy Watch and the University of Victoria's Environmental Law Clinic may soon test the legality of Harper's abuse of democracy.

The Information Commissioner of Canada is being asked to investigate whether "federal government policy forcing scientists to jump through hoops before speaking with the media" breaches the Access to Information Act.

"In sharp contrast to past Canadian practice and current U.S. Government practice, the federal government has recently made efforts to prevent the media and the general public from speaking to government scientists,” said Tyler Sommers, coordinator of Democracy Watch, in a statement.

He noted that the scientists conduct research that is paid for by taxpayers who therefore have a right to learn the results.

Calvin Sandborn, legal director of the University of Victoria’s Environmental Law Clinic, said in a statement that "Canadians cannot make smart choices about critical issues such as climate change, oil sands development, and environmental protection if the public does not have full, timely access to the government’s best scientific knowledge on those issues.

"This is why we’ve filed this complaint and why we are asking for a full investigation."

It's time Harper and his political commissars in the PMO were brought to heel.   By blocking public access to Canada's civil and armed services they have transformed both into Harper's partisan political agencies.   This crap has gone on far too long thanks to the complacency of our corporate media cartel and our cowed opposition parties.

Canada is now, a cesspool of corruption and, very much a Dictatorship.

Harper is no Conservative. Harper was Policy Chief for his, Northern Foundation Party of 1989. Harper is linked with Christian Fundamentalists, among other very dubious links. That is likely where Harper's abusive dictatorship stems from.

The tar sands, should be completely shut down. The horrendous pollution in China, turns daylight into night. Their pollution index, is right off the charts. Chinese have to stay indoors. The have to wear face masks and respirators.

Other country's are very angry. China's pollution drifts into their country's and contaminates their food crops.

There is a petition calling for Harper's resignation. Change4better Canada

Harper has no right to even live in this country, let alone govern. He is an evil monster, of the worst kind.

Sometimes I look for simple analogies, to understand or visualize issues. I realize now, that the Northern Snakehead, a nasty invasive fish serves the purpose, if I want to examine The Harper Government in context to Canada and its environment and democracy and culture.

The slimy beast threatens all indigenous freshwater aquatic species, hell we didn't even know if was there at first.. or how dangerous & destructive it was.. or would become. And now its embedded.. and seemingly top of the food chain in all the waterways !

It scares the daylights out of swimmers and waterfowl. Is demolishing sport fishing and habitat and It seems it may have come from China and is impervious to pollution. Draining ponds and lakes may help (kill all the fish and start over), but rivers systems are a huge challenge.

So next time you think about Canada, the House of Commons, our parliamentary system.. try looking at Harper and his PMO as Northern Reform Snakeheads.. and how the slow moving opposition and their parties are simply prey, as are First Nations treaties, voters, pensioners, mainstream media

I tend to think of the current government as pigs.. but that's not fair at all to the the pigs.. Pigs aren't invasive, don't lie and aren't trying to make Canada unrecognizable.

Anyone who has read this blog over the past 6+ years will know that I have railed against Harper's illegal "capture" of the Canadian Forces and our public service and his transformation of both into his personal, partisan political agencies.

In doing this they insinuated the PMO between the people and their government institutions and turned those same institutions into servants, not of the country and its people, but of the prime minister and his minions.

Who else has done this in the past? Names like Stalin come to mind. The opposition let out a few feeble whines but then let the subject drop. Harper abused us and the opposition let him get away with it. The Canadian news media likewise failed us.

Three or more years ago I did a post inviting currently practicing lawyers on our aggregators to bring an action against Harper to stop this abuse. There are several lawyers on our sites. Not one even responded. The opposition parties could have done precisely the same thing. No. The media could have challenged Harper's gag rule government. No.

Our prime minister is an unprincipled rogue who will steal every possible measure of power he can get away with and we have let him get away with plenty.

You have to check out this new site:

I am a Canadian government scientist who, as part of the federal cuts announced last may, had their program cut and was told that their services “may no longer be required”. Clearly, I’m pissed about the decision, as I thought it was a pretty great program. And I’ve grown tired not making that opinion more clear. Hence the blog. Currently looking for gainful employment elsewhere, and will remain anonymous until I am successful. Excuse my shitty blog page, I’m new to this, and will try to get more fancy as I go."