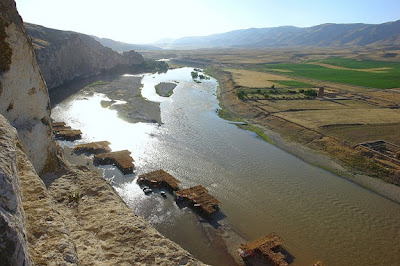 Just what a country riven by ethnic and religious conflict needs - a water crisis.   The country is Iraq where Shiite and Sunni struggles overlap into Arab, Persian and Kurdish conflicts under a hopelessly corrupt and brutal, Shiite-dominated central government.

So which bunch is going to have to get by without water?

The fertile crescent formed by the Tigris and Euphrates rivers created the birthplace of civilization back in the days of the Mesopotamians.

Over the past decade, precipitation in the northern Middle East has fallen while temperatures have increased.   A Yale study of the drought in that region from 2007 to 2010 caused hundreds of thousands to migrate from Iran, eastern Syria and northern Iraq.  Worse is on the way.

A joint NASA, NCAR, UC Irvine study, published in the journal Water Resources Research, using data from the Gravity Recovery and Climate Experiment (GRACE) satellite found that Iraq is poised on the edge of a severe water crisis.

The Tigris and Euphrates basin were found to have lost 117-million acre of stored freshwater between 2003 and 2010.   The Baghdad government responded by drilling 1,000 wells and set about rapidly depleting the country's groundwater reserves.   From smithsonianmag.com:

"The Middle East just does not have that much water to begin with, and it’s a part of the world that will be experiencing less rainfall with climate change,” said UC Irvine professor Jay Famiglietti. “Those dry areas are getting dryer.” In fact, the region is experiencing the second-fastest rate of groundwater storage loss on the planet, surpassed only by India.

Yet, demand for freshwater continues to rise worldwide, including in the U.S., where aquifer depletion is also a growing problem. Groundwater supplies in the Southwest and western Great Plains have been stressed for many years, according to the United States Geological Survey (USGS). The area surrounding Tucson and Phoenix in south-central Arizona has seen the highest drop in groundwater levels–300 to 500 feet–but other regions have also suffered. Long Island and other parts of the Atlantic coast, west-central Florida and the Gulf Coast region–notably Baton Rouge–are out of balance. And perhaps most surprisingly, the Pacific Northwest is experiencing groundwater depletion as a result of irrigation, industrial water use and public consumption.

Iraq is short of drinkable water. No surprise.

Secret Behind the Sanctions -- How the U.S. Intentionally Destroyed ...

The Euphrates and Tigris both rise in the mountains of eastern Turkey, fed by
winter rainfall. ... The ground water in middle Iraq is already at 7000 ppm, and in
the south it is ... The Turks are building a massive project which will have 21
dams in the ... across the Syrian border, and could cut Iraq's Euphrates water by
80%.
mygeologypage.ucdavis.edu/cowen/~GEL115/115CHXXMideastwater.html
Turkey's Dams Are Violating Human Rights, UN Report Says | Green ...

Jun 4, 2011 ... Turkish dams don't just affect Turks — they cut off access to water in Iraq and
Syria as well, forcing entire populations in those countries to ...
www.greenprophet.com/2011/06/turkeys-dams-are-violating-human-rights-un-report-says/

I forgot about poor Fallujah : site of intense DU shelling and background for a farce.

Just wait for "stillsuits" to appear at your local Wal-Mart.

Actually, there may be mitigating developments. A number of labs are reporting 200-300% increase in efficiency with the latest de-salinization membranes. These are about 4-5 years from introduction, but the ability to increase the ability to produce 2-3 times the fresh water at the same cost may be a game-changer.

Yes, Opit, Turkey is playing a significant role in damming off Iraq's water supply although they deny it.

The "stillsuit" reference was a bit obscure, Ed. I did look it up. I'm not convinced about the suitability of de-sal. It's energy intensive and no one seems to have figured out how to deal with the toxic brine discharge.

@The Mound: Stillsuits are obscure?! Maybe I am too old, but Dune, by Frank Herbert was and is one of the most popular science fiction novels of all time.
w.r.t. the toxic brine discharge from de-salination, I suspect that when faced with the dilemma of mass starvation and thirst, the brine will get produced, and dumped somewhere more or less out of the way. This will be a minor problem if it comes to that. We will be too busy fighting massive resource wars, and herding climate refugees into holding camps to worry about a wee bit of toxic sludge.

The problem with brine, BGB, is that it tends to get pumped into coastal waters where it quickly becomes very toxic to marine life in the area. It's full of not merely salts but all the contaminants in the local waters including heavy metals and carcinogens. They get concentrated in the brine and fired back into the same waters were coastal fisheries are operated.

The Dune movie tended to be obscure if you hadn't read a number of novels about fremen culture. And there are exchangers which squeeze water from the air - not just fog harvesters, either. But poisoning the well is the oldest desert warfare technique - something lost to students of modern war although there are similarities through degradation of infrastructure that look suspiciously like water warfare. Katrina for instance.A very good analysis on the Mississippi navigation channel mess is posted at Contrary Brin ; David Brin's site. Plus South Korea thought North Korea was rather reckless with the use of floodgate releases at times.
Hydraulic empire - Wikipedia, the free encyclopedia
en.wikipedia.org/wiki/Hydraulic_empire
A hydraulic empire (also known as a hydraulic despotism, or water monopoly empire) is a social or government structure which maintains power and control ...
http://quizlet.com/17708263/combo-with-world-civ-hydraulic-civilizations-test-and-2-others-flash-cards/