"The Worst Procurement in the History of Canada" 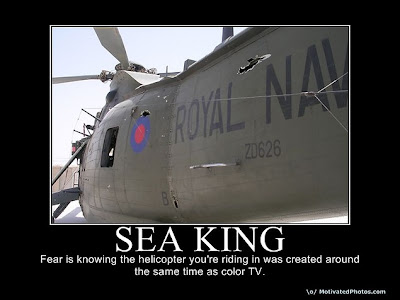 At least until the F-35 saga is wrapped up.   "The Worst Procurement in the History of Canada" is the title of a report released by the Rideau Institute and the Canadian Centre for Policy Alternatives into the inept and seemingly endless quest for a helicopter to replace the Canadian navy's sclerotic Sea Kings.

2013 marks the 50th anniversary of the entry into service of Canada’s Sea King helicopters, which despite their age and associated risks are still being relied upon by the Canadian Forces.

That the Government provide full transparency on the Maritime Helicopter Project;

That the Government get tough with Sikorsky regarding the overdue and over-budget CH-148 Cyclone by actually imposing the late penalties, and refusing further top-up funding;

That the Government commence an accelerated review of off-the-shelf alternatives without further delay, so as to be in a position to negotiate a new contract with another supplier in the event of a continued failure by Sikorsky to fulfill its obligations.

Inspired by Michael Smyth's column in today's paper there is much chatter about BC Hydro's smart meter buy being "The Crookedest Procurement in the History of Canada".

no business case, no bids, no oversight and - it seems - BC Liberal insiders making big bank on the the contracts

An arranged (via prorogue) election, that was bought and paid for = procured .. does it not ?

No more, no less than a dismal, arranged or procured wedding, between an unwilling & shocked bride (Canada) and a pathetic but vicious groom (The Harper Government)

Seriously though, your article and the topic deserve critical attention.

Those are our Canadian air crews flying dreadfully outdated equipment as well as ground crew servicing them.. and flight ops sending them out on military, training, support or transport missions, and rescue missions in what is often the worst weather and locations imaginable.

If that aint courage and exemplary service deserving our support and our recognition, then I don't know what is. And when 30 or 40 of our troops jump aboard, that's an act of faith from them as well.

My hair stands on end reviewing this sample of what a BC crew out your way, from 19 Wing 442 Transport and Rescue Squadron pulled off in 2006, in their Cormorant.. up in Knight Inlet. And as you know, completely typical of operations a Sea King may be tasked for.

If the current state of affairs is completely due to Sikorsky delivery or logistical failures.. that must be addressed. If our government or related Ministries, either past or present is part of the problem instead of leading the solution .. that must also be addressed.

The son of one of my former secretaries flew the damned things back in the late 90s and I used to get Sea King horror stories from him back then. Ships having to go to sea without a chopper because there were none to be had that worked. Crews refusing direct orders to fly them. Fuel leaking and being heard sloshing about inside the fuselage.

I can't think of a single acquisition the Harper government hasn't screwed up save for the Leopard 2 tanks.

Status of the Leopard tanks n our crews is ????

I know they're not deployed domestically .. so far ....

I'm not aware of the current status of the Leopard 2s. Some were sent to Afghanistan. The rest are, if memory serves, in Suffield, Alberta. Then again I'm not sure what they did with the old Leopard 1s from the Trudeau days.