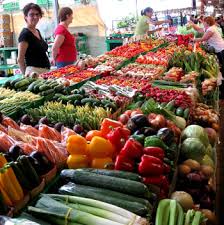 I think that, at some level, most progressives "get" what this Brit farmer is saying.

Food, especially cheap food, is on the mind of many Britons this week after the head of supermarket giant, Tesco, warned that the days of cheap food are over.   Around the world there is more and more money chasing the limited and endangered supply of foodstocks and for Britain, which imports the bulk of its food, that means higher prices.

Which led farmer, Tobias Jones, to respond by urging his fellow Brits to break their addiction to cheap food.

"...we've become so hooked on cheap food that we ignore the hidden costs: the poisoning of our land by pesticides; the consequent collapse of bee colonies, thus declining rates of pollination; the destruction of ancient woodlands and hedgerows; the mass slaughter of cattle because of ludicrous feeding practices that led to BSE – and, lest we forget, 176 people have died in the UK of the resultant Creutzfeldt-Jakob Disease. And the drugs metaphor is entirely appropriate since, like a dodgy dealer, many people have been cutting beef with horse to make it go further.

...In the town near where I farm in Somerset, there's no butcher, greengrocer or fishmonger thanks to the cathedral-like Tesco in the ghastly retail park. But in a way, supermarkets are only giving us what we want, and some of us need: food that's cheap as chips. Why else would every supermarket advert be about price?

With independent retailers decimated, small-scale producers don't know where to place their crops. At this time of year you regularly see someone walking from door to door with bulging bags of courgettes, chard or plums. They simply don't know what to do with them all. The advent of farmers markets helps a bit, but there's still no cheap, accessible marketplace for smallholders.

...where farming used to be communal, an activity that united the whole village at key times in the calendar, it's now a sad and isolated profession. The typical farmer is likely to be a lonely, often overweight tractor-driver who barely touches the soil. He or she might as well be an HGV driver. If farming has one of the highest suicide rates of all careers, it's because of a combination of soul-destroying solitude and frightening debts racked up through idolising costly machinery.

The other problem is that globalisation, rock-star chefs and endless foodie TV have given us a taste for exotic foodstuffs: our palates are suddenly so sophisticated that we want pomegranates and figs and za'atar and everything else. The countries that supply such delicacies don't, of course, care much for our spuds and parsnips. The result is that we're importing ever more food.

Don't get me wrong, I love cosmopolitan cuisine. But we've so lost touch with our culinary roots that we no longer know how to source food that's staring us in the face. For some reason, this year has been spectacular for elderflowers. Its creamy flowers have been everywhere this summer, even in towns and cities, so we made gallons of cordial: the pearly stuff, but also pink cordial from "black lace". Years ago I used to meet dozens of people when picking elderflowers, but this year I didn't meet one person. It's the same when we go blackberrying in early autumn. The reason, I guess, is that most of us are now too busy, or lazy, or perhaps just too ignorant. It's so much easier to go to Tesco.

I suspect that the future is a little brighter for farmer Tobias due to the end of dirt cheap food.   Higher prices, especially for imported foodstuffs, can't help but fuel demand for locally-grown and raised food.

Still, when we go to a Loblaws or a Sobeys or Costco, we are making choices that impact local agriculture.  It probably wouldn't hurt to keep that in mind when we're going for that shopping cart.
Posted by The Mound of Sound at 8:09 AM

I read your link to Krugman's piece in the NY Times this morning, and read several of the most popular comments. A main theme among them was unemployment and it's consequences not only in 'other' world countries, but in North America and Europe must be addressed, and soon. I suppose we all know that, but it reminded me of something I read some time ago.

In the latter 1950's, approx 50% of Canada's population were employed either directly or indirectly in some way related to agriculture. It went on to say less than 5% are employed in the same fields today.

The Globe and Mail ran an article recently about a family farming operation in PEI, potato farmers of course, and that family was trying to use that donations mechanism that Gawker used to raise a couple hundred grand to buy the alleged Rob Ford video, in an attempt to save their farm that had been in the family for several generations.

Ford follies generated lot's of interest, the plight of the family farmers, last of their breed, not so much. In fact no one commented.

Irving has pretty much taken over the PEI potato industry. Even the European born lads who were astute enough not to rely on the domestic trap that the oligarchs set and could control, have fallen on bad times recently. Domino effect I suppose. One of those lads from NB, spent a year in a Lebanese jail before public pressure, and a Liberal Senator brought the issue to a boil, and he gained his release. He's now suing the Federal Government, and they are using our tax dollars to fight him. Of course. Not like the Cons would use their own money, they have learned their lesson well from their masters like Gerstein and US Corporate entities and politicos.

I find few true friends of farmers among Liberals or Conservatives btw. Not sure about the NDP as I haven't heard much from them on the subject. The Green Party however, stand for grow local, buy local, and sustainable economics. In the late 50's / early 60's our population was approx 20 million. Now it's approx 33 million. We need to farm from an oscillating tractor that looks more like a payloader than it does a tractor?

Greens also oppose Genetically Modified Franken organisms, as do many European Countries, and apparently Russia, and I do too. Not that my opinion matters in the world of the geniuses who brought us the latest economic crash and buying opportunities, but I'm entitled to it. We have the medals and all that goes with it to give me that right.

I came to the Greens somewhat reluctantly, Anon, but now I wish I had moved much earlier.

Both my parents were farm kids, born to small landholders. I have one cousin still farming and he now has about 800-acres that he works in a highly-mechanized, quasi-industrialized fashion.

We inherited this extraordinary country and through people like you, the 'people' need to be encouraged to think and consider what things from the past should be fought for, and what things should pass from the pages of time.

Artists have a way with words, that I will never be able to command.

I do however remember words of someone very close to me who said, he was never right again after the second time he went into the drink on the Mermansk run.

Things that old people remember that don't mean a hoot to the I phone generation. But it should matter to them. They should explore beyond Tim's

If they don't, if they remain steadfast in their acceptance of their own ignorance, what can anyone really do to make a difference?