How Much Of a Third World Country is Okay for Canada? 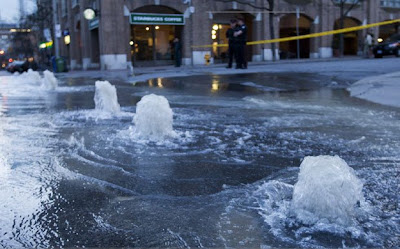 We've been given a price tag for adapting Canada's essential infrastructure to climate change - one trillion dollars, give or take a few billion.   I'm pretty sure that's an American trillion - one thousand billion - not the British trillion - one million billion.

So let's say we spread that out over fifty years at twenty billion per annum.   The federal government alone supposedly takes in some $260-billion a year so $20 to 30-billion a year spread out among the feds, provinces and municipalities should be doable.

Do we have a fifty-year window to rehabilitate our infrastructure?  That's highly unlikely.  We're probably going to have to pick and choose what to maintain, what to fix and what to simply abandon, at least for the time being.

At the same time, we've got a lot of infrastructure that's been getting very long in the tooth such as eastern Canada's power grid, our national railway system and did I mention the 401?   The point is, not all of this infrastructure overall is going to be a drag on the economy or our government treasuries.  A good chunk, maybe most, will pay dividends for decades, perhaps generations.  Putting money into essential infrastructure is an investment just as much as it is an expense.  There was a time we understood that.

The alternative, the status quo, is to kick these problems down the road instead of coming to grips with them today.   That, however, is the road to Third Worldom.  Utilities become interrupted, unreliable.   Water service is available intermittently even as freshwater erupts through roads from broken mains.   Sidewalks become impassible, roads become broken and cratered.  Life itself becomes governed by sporadic conditions.
Posted by The Mound of Sound at 10:02 AM

Those are exactly the consequences Toronto had to contend with during and after its flooding 'episode' the other evening, Mound. However, the response by the benighted mayor of that city was only that he wants to review Toronto's emergency response. Oh yeah, and because electricity was 'hanging by a thread,' he asked people to conserve energy.

With the vacuum of political leadership in this country, I expect there is only much worse to come, with little or no long-range planning beyond winning the next election.

We also need to think of the positive economic results of infrastructure spending.

The TVA, Marshall Plan, interstate construction all brought stalled economies alive , as did CMHC policies in the 50's.

Yes! Absolutely! However the government may be all tied up with the following...CALGARY – Alberta’s energy regulator has recommended approval of Shell Canada’s plan to expand oilsands production even though it acknowledges the environmental impacts will likely be so severe and “irreversible” that new protected areas should be created to compensate for the damage.

Lorne I have to say I haven't been in Ontario for several years but I find your observations chilling. As a nation our society rests on our infrastructure and yet there has been a troubling tendency in recent decades to avoid overdue upgrading and restoration to duck the expense.

Our leaders are abdicating their responsibility to lead and there are many among us who welcome their complacency as sparing us some unjustifiable tax burden.

Rumley, you're right about infrastructure as investment. Yet look at the miserable effort Ignatieff and Harper put in during the 2008 recession. I was furious about their betrayal back then:

Instead of meaningful stimulus spending we had the spectacle of Iggy boasting he was putting Harper "on probation."

Haha, your first paragraph is going down in my history books filed under "awesome". Great stuff, as always!