From Paradise to Paradise Lost 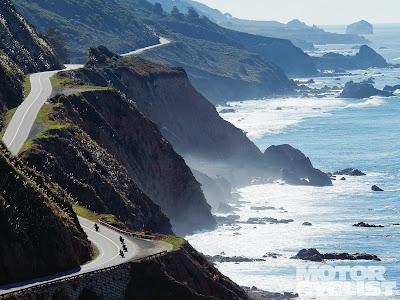 If you've never experienced the magic of California's Pacific Coast Highway, you might want to add that to your list of things to see before they're gone forever.

To a motorcyclist, Hwy 1, the "PCH", is paradise.   The two-lane blacktop undulates along the rugged California coast, dipping from cliff tops to sea-level ravine crossings, it offers almost non-stop corner carving.

Unfortunately the PCH may soon become Paradise Lost.  Last month's issue of Vanity Fair had an article on how the richest of the rich in Nantucket and in Malibu are watching helplessly as sea level rise begins to claim their coastal retreats.   The article notes that sea level rise is also expected to make the PCH unpassable from washouts.

This warning is confirmed by studies undertaken by the U.S. National Center for Atmospheric Research, or NCAR, into sea level rise, the increase in storm surges and the vulnerability of U.S. coastal regions.  Climate Central scientist Claudia Tebaldi says the impacts won't be uniform across coastal America.   Some places, like along the Texas Gulf coast are used to severe storms and surges and so development is further back from the water's edge.

“What is more surprising is that the greatest threats from sea level rise and future storm-surge effects will likely occur along the Pacific coast,” Tebaldi says.

Even a relatively small sea level change may result in large changes in risk because people and infrastructure in these areas haven’t had to deal with the effects of sea level rise, explains Tebaldi. For example, the San Francisco Bay area will likely be more susceptible to storm surges than a city like Galveston. In Galveston, where hurricanes frequently occur, residents live further away from the shoreline and infrastructure is built to withstand severe storms and storm surges. San Francisco has rarely had to deal with flooding or severe storms so risks from storm surges are going to be higher.

Sad as it is, the Pacific Coast Highway was not engineered or constructed with the powerful erosion of 21st century coastal storms in mind.  Maybe California Hwy 1 will be the Route 66 of the future.
Posted by The Mound of Sound at 9:23 AM

I have always wanted to travel the PCH, Mound. Your post lends some urgency to that desire.

It's one of those really great things, Lorne, that has to be experienced to be believed. Pictures alone really don't do it justice.

I've done it a total of 8-times (four round trips) and wasn't sure I'd do it again until I read the erosion warning in Vanity Fair.

Now I'm planning to do it again next spring. The best part of the PCH is from the redwood forests of northern California to San Francisco and then on to Monterey and Big Sur. Once you get into the L.A. zone, it's not nearly as enjoyable IMHO.

But, if you get a chance to drive it, begin your trip in northern Oregon. The Oregon coast road, especially toward the south, is also spectacular in its own way.

It's a shame this is going to be lost, Lorne.

Absolutely transcendental! Traveled it back in 67-68 as a hitchhiking hippie. Slept on beaches, watched the sun set into the ocean, overwhelmed by the magnificence of the redwoods...
All we worried about then were damaged Vietnam vets finding us alone along the lonely stretches of the coast. I doubt if I'll experience that route again, but the memories are vivid. It was so long ago that all my photo memories are slides.

Al, you really should try to eke out one more run down Cal Hwy 1. The northern part is still much as it ever was - beautiful, empty, raw.

I'm accustomed to running mountain roads and challenging the twisties but there's something about the PCH that's different, ethereal. Perhaps it is transcendental. Astride a particularly high-powered, nimble bike (not a Harley) it practically taunts you to ride it to the edges. Even at my (our) age, Aleve makes it bearable the day after.

Mound - My husband would love that ride. He owns 3 old BMW bikes . His latest has a sidecar. I'd love to travel it, but in a car.

The Great Ocean Road in Australia, as beautiful as you describe the PCH, is suffering the same fate.