What's Old Is New Again. The Return of the Workhouse. 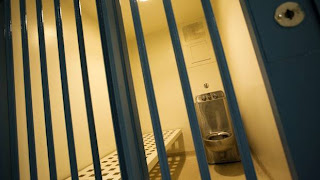 Stephen Harper has a prison fetish.  Despite steady declines in crime rates in Canada over the past four decades, Steve is hell bent on building new prisons.  We like to mock him for this but maybe we shouldn't be so quick to dismiss it as the product of a whacked-out fundamentalist mind.


Harper just might be introducing Canada to a project that's well underway in the United States - the return of the workhouse and the transformation of the poor into profitable slave labour.  That, at least, is the way Chris Hedges sees it.

Poor people, especially those of color, are worth nothing to corporations and private contractors if they are on the street. In jails and prisons, however, they each can generate corporate revenues of $30,000 to $40,000 a year. This use of the bodies of the poor to make money for corporations fuels the system of neoslavery that defines our prison system.

Prisoners often work inside jails and prisons for nothing or at most earn a dollar an hour. The court system has been gutted to deny the poor adequate legal representation. Draconian drug laws send nonviolent offenders to jail for staggering periods of time. Our prisons routinely use solitary confinement, forms of humiliation and physical abuse to keep prisoners broken and compliant, methods that international human rights organizations have long defined as torture. Individuals and corporations that profit from prisons in the United States perpetuate a form of neoslavery. The ongoing hunger strike by inmates in the California prison system is a slave revolt, one that we must encourage and support. The fate of the poor under our corporate state will, if we remain indifferent and passive, become our own fate.

In poor communities where there are few jobs, little or no vocational training, a dearth of educational opportunities and a lack of support structures there are, by design, high rates of recidivism—the engine of the prison-industrial complex. There are tens of millions of poor people for whom this country is nothing more than a vast, extended penal colony.

Gun possession is largely criminalized for poor people of color while vigilante thugs, nearly always white, swagger through communities with loaded weapons. There will never be serious gun control in the United States. Most white people know what their race has done to black people for centuries. They know that those trapped today in urban ghettos, what Malcolm X called our internal colonies, endure neglect, poverty, violence and deprivation. Most whites are terrified that African-Americans will one day attempt to defend themselves or seek vengeance. Scratch the surface of survivalist groups and you uncover frightened white supremacists.

We can't tolerate the creation of a prison-industrial complex in Canada, we can't.  It's time to take Stephen Harper's prison fetish seriously and consider it a threat to our society and to our families.  The opposition needs to confront Harper on this, make him explain himself, expose him for the underhanded tyrant he is.

It's time our opposition MPs did more to earn their keep.  Contact your oppostion MP and tell him/her so.
Posted by The Mound of Sound at 10:08 AM

Forced jail time for non-violent 'crimes' by mandatory sentences that gag our judges and then to avoid more penalization, have to work for corporate profit at a buck or so per hour at the expense of the unincarcerated unemployed.
The master criminals are running the system.

The cheapest labour is found in prisons. And, over the past year, Vic Toews made it cheaper.

MOS how did you manage to read my mind. Having not read the book you mention this exact conversation took place this morning between me and several other people. Yes..how is it possible we need more prisons when the crime rate is dropping or is the government lying to the Canadian public about the drop?...boggles the mind.

And no wonder Harper is dead set against decriminalization or legalization of weed - it would deny him & his corporate masters of a massive pool of cheap prison labour.

In Kingston, one of the work-houses is known as Corcan. Big production for the feds--furniture, etc. Certain orchards there use prisoners. A lot of that town was built by prisoners. The prisoner makes enough money to buy a few chocolate bars and cards to send to their famalies for birthdays and anniverseries. Yay. At least there's that.

Families. Spelled it wrong twice in one day. Oh well.

Anyone remember when we used to roundly castigate the Chinese for producing goods with prison labour? Oh my Lord were we vexed at that. Inhumane, a crime against mankind itself and all that was decent.

Somehow that seems to have changed.