The Dismal Plight of Bradley Manning 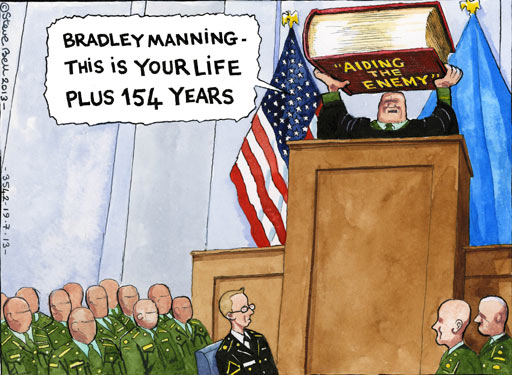 In a preliminary ruling on the multiple charges Mr Manning faces, military judge Colonel Denise Lind threw out a defence motion that the prosecution had failed to produce evidence to sustain a charge that Manning had 'aided the enemy.'

...But in insisting on the 'aiding' charge and 11 others, the Obama administration is holding out for another 154 years jail time – with no parole option.

Claiming to be 'extraordinarily disappointed' by the decision, Colonel Morris Davis, formerly a director of the US Air Force's judicial system and chief military prosecutor at Guantanamo, told The Guardian that normally he was a defender of the system of military justice, but he was rethinking his support because the heavying of Mr Manning.

Comparing the open-throttle pursuit of Mr Manning with the aftermath of the Haditha atrocity during the Iraq War, in which 24 unarmed civilians, including women and children, were gunned down by US Marines, Davis said: “When you think about these different responses, it suggests to me that the military justice system is not working.”

In the military court cases after Haditha, all charges against six of the marines were dropped; one of their comrades was found not guilty; and another was convicted on just a single count by which he avoided jail as a punishment.

Describing the Thursday's Mr Manning decision as 'a travesty of justice,' Amnesty International's senior director for international law, Widney Brown told reporters: “It's absolutely clear that the charge of 'aiding the enemy' has no basis and the charge should be withdrawn.”